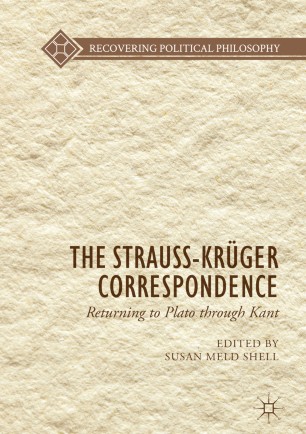 Returning to Plato through Kant

This book presents the first full translation of the correspondence of Leo Strauss and Gerhard Krüger, showing for each the development of key and influential ideas, along with seven interpretative essays by leading Strauss scholars. During the early to mid-1930’s, Leo Strauss carried on an intense, and sometimes deeply personal, correspondence with one of the leading intellectual lights among Heidegger’s circle of recent students and younger associates. A fellow traveler in the effort to “return to Plato” and reject neo-Kantian conventions of the day, Krüger was also a serious student of Rudolf Bultmann and the neo-orthodox movement in which Strauss also took an early interest. During the most intense years of their correspondence, each underwent significant intellectual development: in Krüger’s case, through a penetrating series of studies of Kant and Descartes, respectively, ultimately leading to Krüger’s conversion to Catholicism; and, in Strauss’s case, through the complex stages of what he subsequently called his “reorientation,” involving what he for the first time calls “political philosophy.” Readers interested in tracing the development of Strauss’s thoughts regarding a theological alternative that he found helpfully challenging—if not ultimately compelling—will find this correspondence to be an accessible point of entry.

Susan M. Shell is Professor and Chair of the Department of Political Science at Boston College, USA. She is the author of Kant and the Limits of Autonomy (2009), The Embodiment of Reason: Kant on Spirit, Generation and Community (1996), The Rights of Reason: A Study of Kant's Philosophy and Politics (1980). She is also the co-editor (with Robert Faulkner) of America at Risk: Threats to Liberal Self-Government in an Age of Uncertainty (2009).