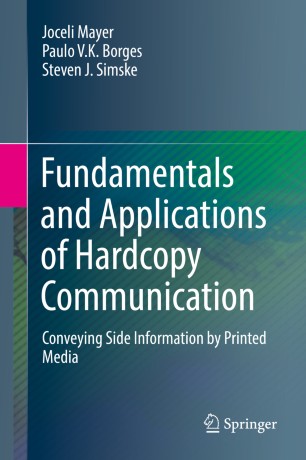 Fundamentals and Applications of Hardcopy Communication

Conveying Side Information by Printed Media

This book presents covert, semi-covert and overt techniques for communication over printed media by modifying images, texts or barcodes within the document. Basic and advanced techniques are discussed aimed to modulate information into images, texts and barcodes.

Conveying information over printed media can be useful for content authentication, author copyright, information and piracy product deterrent, side information for marketing, among other applications.

Practical issues are discussed and experiments are provided to evaluate competitive approaches for hard-copy communication.

This book is a useful resource for researchers, practitioners and graduate students in the field of hard-copy communication by providing the fundamentals, basic and advanced techniques as examples of approaches to address the hard-copy media distortions and particularities.

Joceli Mayer
Prof. Joceli Mayer, Ph.D.,  is currently a Full Professor at the Department of Electrical Engineering from Federal University of Santa Catarina, Brazil.  He got his Ph.D. degree  from the University of California at Santa Cruz in Computer Engineering, CSE-UCSC under Prof. Glen G. Langdon. His interests include digital signal processing applications, image processing and computational vision, speech coding and VOIP systems, signal recognition, detection and watermarking of image, video, speech, audio and printed documents. He is an author on more than 100 publications. He also has contributed with solutions in DSP  to the industry partners (Hewlett Packard, Intelbras, AGM, Pixeon, Amplivox). Director of the Laboratory of Research on Processing, Communication and Recognition of Signals – PSILAB at UFSC.

Paulo Vinicius Koerich Borges
Paulo Vinicius Koerich Borges, is a Principal Research Scientist and currently leads the Robotics Perception Team at the CSIRO's Autonomous Systems Laboratory, in Brisbane, Australia. He received the B.E. and M.Sc. degrees in electrical engineering from Federal University of Santa Catarina (UFSC), Brazil, in 2002 and 2004, respectively. In 2007 he received his Ph.D. degree from Queen Mary, University of London (QMUL) and UFSC, followed by a Post-Doc in 2008 at QMUL, before moving to CSIRO in 2009. In 2012-13, he held a visiting scientist appointment at ETH Zurich in Switzerland. His current research focuses on computer vision applied to robotics, multi-sensor information fusion and image processing. Aside from his position at CSIRO, Dr. Borges is also an Adjunct Senior Lecturer with the School of Information Technology and Electrical Engineering at the University of Queensland, Australia.

Steven J. Simske
Steve Simske is a Professor in Systems and Mechanical Engineering at Colorado State University. Until 2018, he was a Fellow in HP Labs and Director of Research. Steve spent his first five years at HP in the Imaging and Printing Group, where he worked on image processing, image analysis and document understanding technologies that were later incorporated into HP Labs projects for automatic book digitization, document understanding, speech recognition and other classification and analytics programs. In developing these technologies, the toolset for architecting massive intelligent systems was honed--now known as meta-algorithmics--affording the combination of two or more intelligent systems to create more robust, accurate and often faster larger systems, or "ecosystems".

In Labs, Steve later worked on medical signal processing for portable medicine, including novel means of reducing biological noise in electrocardiograms (ECGs). Steve was then given the opportunity to create the Security Printing and Imaging program within HP. This research incorporates image analysis, security, analytics and forensics to prevent counterfeiting, protect branded products, and provide investigative support for anti-fraud. Much of this work has been taken forward to supply chain analytics, dynamic biometrics and secure document lifecycle, which are Steve's current focuses. As of 2018, Steve has more than 160 issued US Patents and roughly 400 peer-reviewed publications.

Steve was a member of the World Economic Forum Global Agenda Councils, including Illicit Trade and the Future of Electronics, until 2016. Steve is a participant in several GS1 standards committees, and an IS&T Fellow. Before HP, Steve received his BS (Biomedical Engineering) from Marquette University, his MS (Biomedical Engineering) from Rensselaer Polytechnic University, and his PhD (Electrical Engineering) and PostDoc (Aerospace Engineering) from the University of Colorado. Steve has been on the faculty at the University of Colorado, Regis University, Colorado School of Mines, and Colorado State University. He has designed and developed animal life support hardware, performed experiments on a dozen US Space Shuttle missions, written the first optimal reconstruction system for impedance tomography, and co-invented "lifetime" orthopaedic implants.

Steve has mentored more than 30 graduate students, many of whom are now professors at major universities. Steve has been fortunate to work for and with some of the world's most creative and intelligent people over the years. This extends to his home, where his partner, Teresa, also an engineer with an advanced degree, and his two awesome sons, Kieran and Dallen, keep him happy, busy, and honest. Steve loves hiking, soccer, hockey, fencing, piano, travel, languages, reading and computer programming.