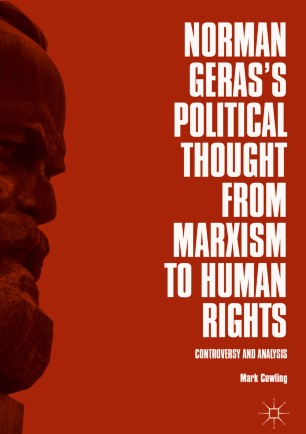 This book provides a critical account of the main controversies involving Norman Geras, one of the key modern political thinkers. It moves from his youthful Trotskyism on to his book on Rosa Luxemburg, then his classic account of Marx and human nature, and his highly regarded discussion of Marx and justice. Following this, Geras tried to elaborate a Marxist theory of justice, which involved taking on-board aspects of liberalism. Next he attacked the post modernism of Laclau and Mouffe and criticised Rorty’s pragmatism, and then elaborated a contract of mutual indifference from a detailed study of the Holocaust. Lastly he wrote a book on human rights and humanitarian intervention, defending the 2003 invasion of Iraq. Cowling varies from exposition and admiration, to ideas about how Geras’s work should be interpreted, to criticism of his Trotskyism and of his support for the invasion of Iraq. The book will appeal to readers interested in Norman Geras and Marxism in particular, and social and political theory in general.

Mark Cowling was Professor of Criminology and Marxism at Teesside University, UK.  Publications include Marxism and Criminological Theory (2008) and Political Issues for the Twenty-First Century (2004). He is the editor of the journal Studies in Marxism and convenor of the PSA Marxism Specialist Group.

“The book is a success. It is an informing, critical and balanced assessment of Geras’ philosophical excursions, if nothing else. … Norman Geras’s Political Thought from Marxism To Human Rights does exactly what it says on the cover, and perhaps that is all we might ask of it.” (William Hebblewhite, Marx and Philosophy, marxandphilosophy.org.uk, March 16, 2021)