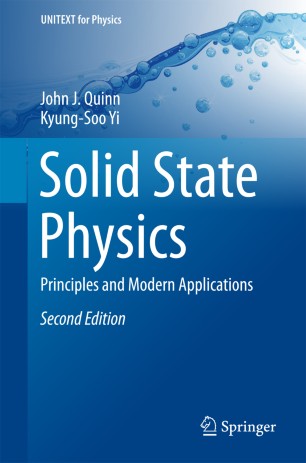 This book provides the basis for a two-semester graduate course on solid-state physics. The first half presents all the knowledge necessary for a one-semester survey of solid-state physics, but in greater depth than most introductory solid state physics courses. The second half includes most of the important research over the past half-century, covering both the fundamental principles and most recent advances. This new edition includes the latest developments in the treatment of strongly interacting two-dimensional electrons and discusses the generalization from small to larger systems.

The book provides explanations in a class-tested tutorial style, and each chapter includes problems reviewing key concepts and calculations. The updated exercises and solutions enable students to become familiar with contemporary research activities, such as the electronic properties of massless fermions in graphene and topological insulators.

John J. Quinn is a well-known theoretical physicist as well as an academic administrator; he is a former Chancellor and a professor emeritus since 2015 at the University of Tennessee, Knoxville, USA. He is an expert in the areas of solid-state physics and many-body theory including two dimensional Composite fermions, low-dimensional systems, quantum Hall effect and nanoscience. Quinn was also one of the first researchers to recognize that physics of ‘two-dimensional electronic systems’ needs to be treated as a professional-sub-specialty. He has been an active researcher and have published over 350 scientific publications. Quinn earned his doctoral in Physics from the University of Maryland in USA. His doctoral research at Maryland was in “Self-Energy Approach to Correlations in a Degenerate Electron Gas” under the supervision of Professor R.A. Ferrell. After finishing his Ph.D.in 1958, Quinn joined the technical staff at RCA Laboratories. From there he held visiting positions at the University of Pennsylvania and Purdue University before joining the physics faculty at Brown University in 1965 till 1989. From 1989 -1992 Quinn was the Chancellor of the University of Tennessee; where he has held the Willis Lincoln Chair of Excellence, Professor of Physics and Professor of Engineering Science and Mechanics from 1992-2015. He is a co-author of Solid State Physics (Springer, 2009) with Kyung-Soo Yi. Quinn is a recipient of many honours, including:

Kyung-Soo Yi is a theoretical solid state physicist; he is a professor emeritus since 2015 at Pusan National University, Busan, Republic of Korea. Professor Yi's main topics of theoretical solid state physics have been the physics of reduced dimensional solid state systems. Research subjects currently under investigation include the quantum mechanical many-body problem; the study of elementary excitations and optical and transport properties of artificially structured low dimensional systems, including the local field corrections, the collective excitations of spin-polarized system, and the composite Fermion description and many-body correlations for the fractional quantum Hall states. He has been an active researcher and have published over 150 papers in professional journals.  Yi is the author of Physics of Low Dimensional Electrons (AdTec Publications, 2000), and is a co-author of Solid State Physics (Springer, 2009) with John J. Quinn. Yi earned his Ph.D. in Physics from Brown University, Providence, Rhode Island, USA. His doctoral dissertation was under the supervision of Professor J. J. Quinn. After finishing his Ph.D.in 1982, Yi joined the postdoctoral training at Brown University, Colorado State University, and Arizona State University. In 1984 Yi joined the faculty of Physics at Pusan National University till 2015, and from there he held visiting positions at Arizona State University and the University of Tennessee.