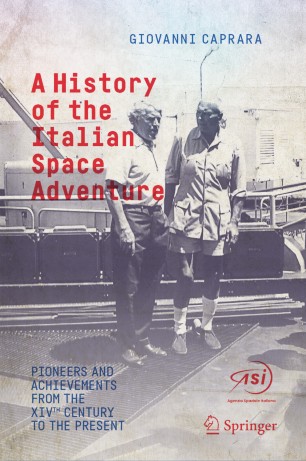 Pioneers and Achievements from the XIVth Century to the Present

This well-documented and fascinating book tells how, over the centuries, a series of visionaries, scientists, technologists, and politicians fostered the involvement of Italy in space exploration. The lives of these pioneers was often far from easy, yet they persevered. The fruits of their efforts can today be witnessed in Italy’s success within the cutting-edge space sector. Italy’s history in space started at the end of the fourteenth century and continued with the development of fireworks. Later, the nineteenth century marked the beginning of research into rockets in a more scientific way. After World War II, rocket technology was advanced with the aid of German scientists, and in the 1960s Luigi Broglio, the father of Italian space exploration, designed the San Marco satellite. In 1979 the first Italian Space Plan was launched, but it was the foundation of the Italian Space Agency in 1988 that kick-started a program of exploration in various fields of cosmic research. The outcome was construction of the Vega launcher and collaboration in the International Space Station. Now the Italian space industry stands ready to play an important role in the Gateway orbital station. All of this history, and more, is explored in this riveting book.

Giovanni Caprara is scientific editor of the Corriere della Sera and Professor of History of Space Exploration at the Politecnico di Milano (Polytechnic University of Milan). He is also curator of the Space section of the National Museum of Science and Technology "Leonardo da Vinci" in Milan. He has received many awards, including the ConScientia Award (scientific journalist of the year) from the universities of Milan in 2000, the European Science Writers Award from the Euroscience Foundation in 2010, and the Award for Scientific Communication from the Italian Physical Society (SIF) in 2016. Since 2011 he has been President of UGIS, the Union of Italian Scientific Journalists. In 2014 he was made a Knight of the Italian Republic. An asteroid in orbit between Mars and Jupiter bears his name (Caprara 10928). He is the author of numerous publications on the history of space science and exploration, published in Europe and the United States. Examples include: The Space Age (Mondadori), The Adventure of Science (Rizzoli), A Brief History of the Great Scientific Discoveries (Bompiani), Discovering the Solar System (with Margherita Hack, Mondadori), Living Space (FireFly), Italy on the Shuttle (Mondadori), and The Complete Encyclopedia of Space Satellites (FireFly).