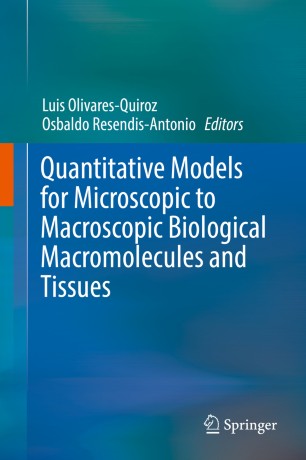 Quantitative Models for Microscopic to Macroscopic Biological Macromolecules and Tissues

This book presents cutting-edge research on the use of physical and mathematical formalisms to model and quantitatively analyze biological phenomena ranging from microscopic to macroscopic systems. The systems discussed in this compilation cover protein folding pathways, gene regulation in prostate cancer, quorum sensing in bacteria to mathematical and physical descriptions to analyze anomalous diffusion in patchy environments and the physical mechanisms that drive active motion in large sets of particles, both fundamental descriptions that can be applied to different phenomena in biology. All chapters are written by well-known experts on their respective research fields with a vast amount of scientific discussion and references in order the interested reader can pursue a further reading. Given these features, we consider  Quantitative Models for Microscopic to Macroscopic Biological Macromolecules and Tissues  as an excellent and up-to-date resource and reference for advanced undergraduate students, graduate students and junior researchers interested in the latest developments at the intersection of physics, mathematics, molecular biology, and computational sciences. Such research field, without hesitation, is one of the most interesting, challenging and active of this century and the next.

Luis Olivares-Quiroz is currently full-time physics professor, researcher, and lecturer at Universidad Autonoma de la Ciudad de Mexico (UACM). He obtained his PhD in 2007 with a thesis on the statistical mechanics of protein folding and its connection to the glass transition. After receiving his PhD, he has been involved actively in research at the interface of physics and molecular biology, particularly on the application of statistical physics, stochastic process, complex networks, and genetic algorithms (GAs) to the analysis of protein folding and unfolding, peptide and protein translocation across membranes, identification of active sites in biological macromolecules as well as computer simulations of interacting potentials for protein folding using GAs. He has been invited to different research institutions both in Mexico and abroad: Department of Biochemistry, University of Arizona, Tucson (USA); Forschungszentrum (Germany); Faculté des Sciences, University of Nantes (France); Department of Physics, Georgia Tech at Atlanta (USA); and the Biophysical Sciences Institute at Durham University (UK). In Mexico, he has been an active and intense promoter of research in biological physics. In 2009 he was granted the National Prize for Science Dissemination for the publishing of a book on the quantum physics of ultracold liquids and gases. He has been also editor-in-chief of Physical Biology of Proteins and Peptides: Theory, Experiment, and Simulation published by Springer in 2015.

Osbaldo Resendis-Antonio is professor of systems biology at the National Institute of Genome Medicine (INMEGEN) and the Research Support Network (RAIUNAM) at the National Institute of Medical Sciences and Nutrition Salvador Zubirán, both in México City. After receiving a Ph.D. in physics in 2003, he switched the emphasis of his research to systems biology, first as a postdoctoral fellow in the Institute Henry Poincare (France), the Center for Nitrogen Fixation-UNAM (México); and the Department of Systems Biology at the University of California San Diego (USA); and then as a principal researcher at the Center for Genomic Sciences-UNAM, México, in 2008. He has been visiting professor in the Systems Biology Department at Harvard Medical School (USA), the group of Bioinformatics and Systems Biology at the University of Rostock (Germany), and the Institute for Systems Biology at Seattle, Washington (USA). His research interest is focused to survey the metabolic pathway alterations associated with multifactorial diseases, such as cancer, through the integrative description among genome-scale metabolic reconstructions, high-throughput data, and the development of constraint based modeling.