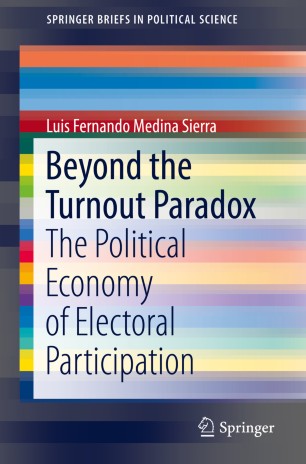 Beyond the Turnout Paradox

The Political Economy of Electoral Participation

​This Brief uses game-theoretic analysis to debunk the turnout paradox and offers an alternative economic model to elucidate the patterns behind the socioeconomic bias in turnout. The author argues that the turnout paradox—the idea that rational, strategic actors would not vote in an election—is an overstated problem, and that, contrary to widespread belief, game-theoretic models of elections with highly realistic parameters are compatible with high turnout. The author applies the method of stability sets to the study of voting games so as to characterize the behavior of electoral turnout in response to the game’s structural parameters. To illustrate the power and potential of this framework, the author then develops a politico-economic model that generates testable theories about the way in which the modern welfare state and redistribution of wealth can shape the patterns of biased turnout that exist in most democracies. By turning a classic problem of rational choice into a source of new methods of analysis this Brief allows game theory to intervene in relevant conversations about the political economy of electoral participation, creating an opportunity for formal methods to make a welcome contribution to the discipline. As such, this Brief will be of use to scholars and student of political science, economics, political economy, and public policy, especially those who work in the tradition of formal methods.