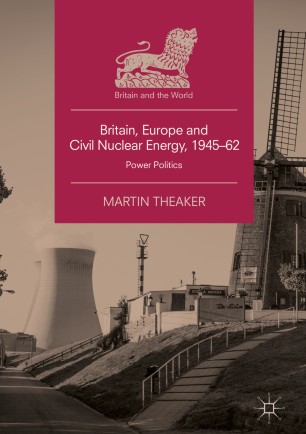 This book examines the role played by civil nuclear energy in Britain’s relationship with Europe between the end of the Second World War and London’s first application to join the European Communities. Tracing the development of the British nuclear programme as it emerged as a global leader in constructing the world’s first atomic power stations, it analyses how the threat of energy shortages throughout the 1950s presented ministers with a golden opportunity to utilise nuclear cooperation as an instrument to influence the political shape of Europe. Importantly, this book will show how this chance was missed by ministers due to a combination of disorganization and diplomatic pressure, as well as a perennial lack of domestic resources. In so doing, this book joins the long-disconnected historiographies of European integration and nuclear energy to offer a new perspective on both scholarly fields.

Martin Theaker studied at the University of Birmingham, UK, before obtaining his PhD in History from Trinity Hall, University of Cambridge, UK, in 2016. He has authored several articles on Britain’s nuclear history and now works in industry in the UK.