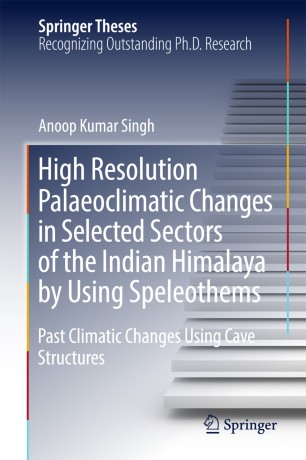 This thesis encompasses a study of past precipitation patterns based on six cave stalagmites from different parts of the Indian Himalaya. This is the first speleothem study in the Indian Himalaya that shows a direct relationship between past precipitation and the collapse of civilization. The stalagmites examined were KL-3 from Jammu and Kashmir; TCS and BR-1 from Himachal Pradesh; and DH-1, SA-1 and CH-1 from Uttarakhand. Based on the high-resolution palaeoclimatic reconstruction (35 U/th dates, 5 AMS dates, 1,500 samples for δ18O and δ13C values) obtained for the duration of the Pleistocene–Holocene transition (16.2–9.5 ka BP) and Mid-Holocene–Present (ca. 4.0 ka BP–Present), three major events were identified, namely the Older Dryas (OD), Bølling–Allerød (BA) period and Younger Dryas (YD) at ca. 14.3–13.9, 13.9–12.7 and 12.7–12.2 ka BP, respectively. The study showed a gradual reduction in the precipitation from 4 ka BP onwards for about a millennium with a peak arid period between 3.2 and 3.1 ka BP. According to the findings, the LIA (Little Ice Age) covers a time span from 1622–1820 AD, during which the climate was wetter than that in the post-LIA period (1820–1950 AD). In addition, this thesis supports the assumption that the WDs (Western Disturbances) contribute significantly to the total rainfall in the Himalaya region.