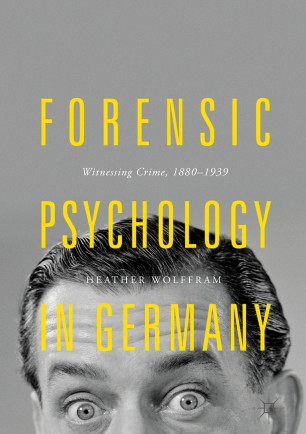 This book examines the emergence and early development of forensic psychology in Germany from the late nineteenth century until the outbreak of the Second World War, highlighting the field’s interdisciplinary beginnings and contested evolution. Initially envisaged as a psychology of all those involved in criminal proceedings, this new discipline promised to move away from an exclusive focus on the criminal to provide a holistic view of how human fallibility impacted upon criminal justice. As this book argues, however, by the inter-war period, forensic psychology had largely become a psychology of the witness; its focus narrowed by the exigencies of the courtroom. Utilising detailed studies of the 1896 Berchtold trial and the 1930 Frenzel trial, the book asks whether the tensions between psychiatry, psychology, forensic medicine, pedagogy and law over psychological expertise were present in courtroom practice and considers why a clear winner in the “battle for forensic psychology” had yet to emerge by 1939.

Heather Wolffram is Senior Lecturer in Modern European History at the University of Canterbury, New Zealand. She is a historian of modern Germany with interests in the histories of medicine and forensics and is the author of The Stepchildren of Science: Psychical Research and Parapsychology in Germany, c. 1870-1939 (2009).