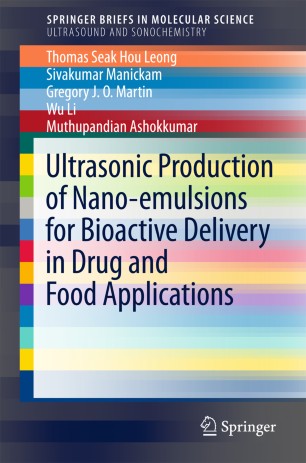 This SpringerBrief provides an overview of ultrasonic emulsification and an update on recent advances in developing stable emulsions for the creation of novel drugs and functional foods, with a focus on bioactive delivery in these products.

Emulsification is the process of combining two or more immiscible liquids to form a semi-stable mixture. These two liquids generally consist of an organic (oil) phase and an aqueous (water) phase that is stabilized by the addition of an emulsifier. Most common emulsions are of the oil-in-water (O/W) type, but can also be of water-in-oil (W/O) or even multiple emulsion types (i.e. double emulsions) in the form of water-in-oil-in-water (W/O/W) or oil-in-water-in-oil (O/W/O) phases. The formation of an emulsion requires input of energy to distribute the disperse phase in the continuous phase in small-sized droplets that are able to resist instability. There is great interest in the use of ultrasound to produce emulsions, as it is able to do so relatively efficiently and effectively compared to existing techniques such as rotor stator, high-pressure homogenization and microfluidization. The interaction of ultrasound with the hydrocolloids and biopolymers that are often used to stabilize emulsions can offer advantages such as improved stability or greater control of formed droplet size distributions.