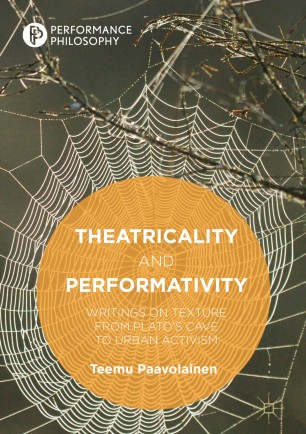 Writings on Texture from Plato’s Cave to Urban Activism

This book reinterprets theatricality and performativity through a dramaturgy of texture and weaving. As cultural metaphors, theatricality and performativity evoke practices of seeing and doing, but also conflicting values of novelty and normativity. With anthropologist Tim Ingold and philosopher Stephen C. Pepper, this study explores a series of intertwining threads, from the theatrical to the performative: Antitheatrical (Plato, the Baroque, Michael Fried); Pro-theatrical (directors Wagner, Fuchs, Meyerhold, Brecht, and Brook); Dramatic (weaving memory in Shaffer’s Amadeus and Beckett’s Footfalls); Efficient (from modernist “machines for living in” to the “smart home”); Activist (knit graffiti, clown patrols, and the Anthropo(s)cene). An approach is developed in which ‘performativity’ names the way we tacitly weave worlds and identities, variously concealed or clarified by the step-aside tactics of ‘theatricality'.