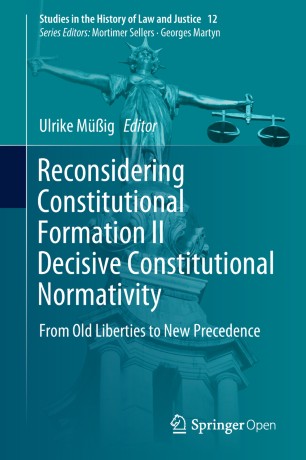 From Old Liberties to New Precedence

Part of the Studies in the History of Law and Justice book series (SHLJ, volume 12)

In the late 18th and early 19th centuries, constitutional normativity began to complete the legal fixation of the entire political order. This juridification in one constitutional text resulted in a conceptual differentiation from ordinary law, which extends to alterability and justiciability. The early expressions of this ‘new order of the ages’ suggest an unprecedented and irremediable break with European legal tradition, be it with British colonial governance or the French ancien régime. In fact, while the shift to constitutions as a hierarchically ‘higher’ form of positive law was a revolutionary change, it also drew upon old liberties. The American constitutional discourse, which was itself heavily influenced by British common law, in turn served as an inspiration for a variety of constitutional experiments – from the French Revolution to Napoleon’s downfall, in the halls of the Frankfurt Assembly, on the road to a unified Italy, and in the later theoretical discourse of twentieth-century Austria. If the constitution states the legal rules for the law-making process, then its Kelsian primacy is mandatory.

Also included in this volume are the French originals and English translations of two vital documents. The first – Emmanuel Joseph Sieyès’ Du Jury Constitutionnaire (1795) – highlights an early attempt to reconcile the democratic values of the French Revolution with the pragmatic need to legally protect the Revolution. The second – the 1812 draft of the Constitution of the Kingdom of Poland – presents the ‘constitutional propaganda’ of the Russian Tsar Alexander I to bargain for the support of the Lithuanian and Polish nobility. These documents open new avenues of research into Europe’s constitutional history: one replete with diverse contexts and national experiences, but above all an overarching motif of constitutional decisiveness that served to complete the juridification of sovereignty. (www.reconfort.eu)