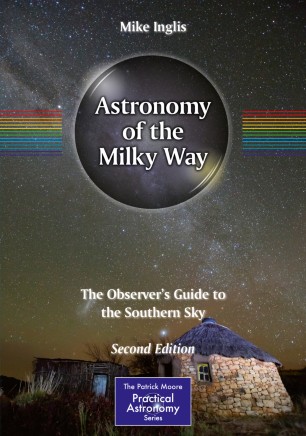 Astronomy of the Milky Way

The Observer’s Guide to the Southern Sky

This second edition of Mike Inglis's classic guide to observing the Milky Way in the Southern Hemisphere updates all of the science about the target objects with new findings from the astrophysics field. In addition, the book boasts a larger format with entirely re-drawn maps. Newly laid out for ease of use with an increased number of images in color, it updates and improves the first edition to remain the most comprehensive text on the subject.

One of the wonders of the universe we live in is the Milky Way, and this book provides a wonderful tour of its highlights for amateur astronomers observing below the equator. In its pages, Southern Hemisphere observers interested in viewing our own galaxy's finest features will find every constellation that the Milky Way passes through with detailed descriptions of the many objects that can be found therein, including stars, double and multiple stars, emission nebulae, planetary nebulae, dark nebulae and supernovae remnants, open and galactic clusters, and galaxies.

The book also details the one thing that is often left out of observing guides - the amazing star clouds of the Milky Way itself. Accompanying the descriptive text there are many star charts and maps, as well as the latest images made by observatories around the world and in space along with those taken by amateur astronomers. This second edition's updated scientific material and an easy-to-use layout perfect for many nights of fruitful observation.

Mike Inglis was born in Wales in Great Britain, but now lives and works in the United States, where
he is Professor of Astronomy and Astrophysics at the State University of New York. He is a Fellow of
the Royal Astronomical Society, a NASA Solar System Ambassador, a Member of the Royal
Institution, and a Member of the British Astronomical Association. He is the author of many books
and research papers including A Field Guide to Deep Sky Objects (Springer, 2012, 2nd edition), An
Observer’s Guide to Stellar Evolution (Springer, 2003), Astronomy of the Milky Way, Vol. I – The
Northern Sky (Springer, 2016), Astronomy of the Milky Way, Vol. II – The Southern Sky (Springer,
2018), An Observer’s Guide to Star Clusters (Springer 2013), and Astrophysics is Easy! (Springer, 2015,
2nd edition). He is a series editor for several Springer book series for both amateur and professional
astronomers, as well as a teacher of undergraduate and graduate students in astrophysics.
Although a professional astronomer, he is also a lifelong amateur astronomer and observes the
night sky around the world, whenever time, and the sky, permit.

“This book follows the Milky Way … . Any constellation within those limits that contains part of the Milky Way is included. A general description of the constellation is given followed by a more detailed description of selected objects of interest such as bright, double, and variable stars, open and globular star clusters, gas clouds, dust clouds, and galaxies.” (Richard Dodd, The Observatory, Vol. 139 (1270), June, 2019)