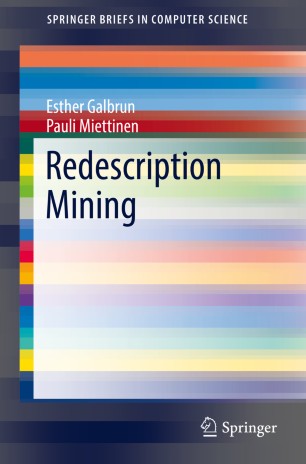 This book provides a gentle introduction to redescription mining, a versatile data mining tool that is useful to find distinct common characterizations of the same objects and, vice versa, to identify sets of objects that admit multiple shared descriptions. It is intended for readers who are familiar with basic data analysis techniques such as clustering, frequent itemset mining, and classification. Redescription mining is defined in a general way, making it applicable to different types of data. The general framework is made more concrete through many practical examples that show the versatility of redescription mining. The book also introduces the main algorithmic ideas for mining redescriptions, together with applications from various domains. The final part of the book contains variations and extensions of the basic redescription mining problem, and discusses some future directions and open questions.

Esther Galbrun is a junior research scientist at Inria Nancy--Grand Est, France. She was previously a postdoctoral researcher at the CS department of Boston University, USA, after having obtained her PhD in 2014 from the CS department at the University of Helsinki, Finland, on the topic of redescription mining.
Pauli Miettinen is a senior researcher and head of the area Data Mining at the Max Planck Institute for Informatics, Germany. He is also an Adjunct Professor of computer science at the University of Helsinki, Finland, where he previously worked in Prof. Heikki Mannila’s group, and received his PhD in 2009. His main research interest is in Algorithmic Data Analysis. In particular, he has been working on matrix decompositions over non-standard algebras and their applications to data mining and on redescription mining.