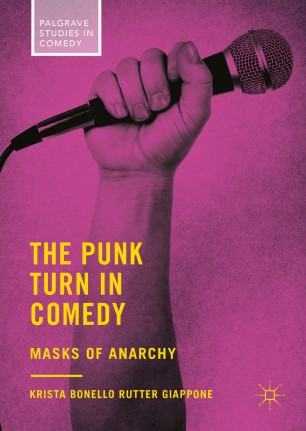 The Punk Turn in Comedy

This book examines the interconnections between punk and alternative comedy (altcom). It explores how punk’s tendency towards humour and parody influenced the trajectory taken by altcom in the UK, and the punk strategies introduced when altcom sought self-definition against dominant established trends. The Punk Turn in Comedy considers the early promise of punk-comedy convergence in Peter Cook and Dudley Moore’s ‘Derek and Clive’, and discusses punk and altcom’s attitudes towards dominant traditions. The chapters demonstrate how punk and altcom sought a direct approach for critique, one that rejected innuendo, while embracing the ‘amateur’ in style and experimenting with audience-performer interaction. Giappone argues that altcom tended to be more consistently politicised than punk, with a renewed emphasis on responsibility. The book is a timely exploration of the ‘punk turn’ in comedy history, and will speak to scholars of both comedy and punk studies.

“Punk scholarship and comedy studies offer a wide range of routes into academic enquiry. The relationship between punk, humour and comedy is a largely unexplored area, with rich and exciting potential for research and critical analysis. This fascinating study of the shared influences that informed the evolution of both punk and alternative comedy in the late 1970s and early 1980s is a timely and important contribution to an evolving and expanding field.” (Dr Russ Bestley, London College of Communication, UK)
Buy options