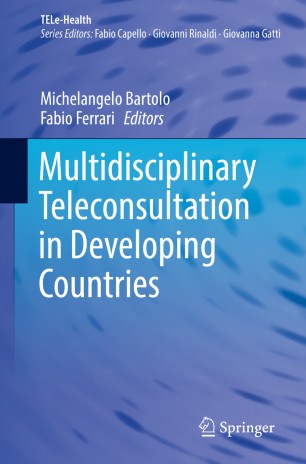 This book presents a replicable model of multidisciplinary teleconsultation, designed and set up by Global Health Telemedicine, that offers very significant health benefits in remote and rural areas of developing countries. The model is based on experiences gained in sub-Saharan Africa while training and cooperating with local health professionals within the DREAM program, managed by the Community of Sant’Egidio. This program has to date treated almost 300,000 patients across many countries and has provided health education and disease prevention training to tens of millions. It originated in the context of the fight against AIDS but has been extended to encompass other pathologies and to exploit the capabilities of new telemedicine technologies that allow multispecialist teleconsultation (hence the acronym now represents “Disease Relief through Excellent and Advanced Means”). In addition to thorough description of the program, readers will find reflections and analysis on logistical, technical, sociological, and epidemiological issues. The book is divided into thematic chapters with easy-to-understand graphics. It will be a readily accessible source of information for professionals in international cooperation and global health students and professionals.

Michelangelo Bartolo has worked in the Angiology Unit (UOC) of the San Giovanni Addolorata Hospital in Rome, Italy, since 1998, and in 2006 he took charge of the telemedicine department at the same hospital. He is among the creators of the Community of Sant'Egidio’s DREAM program for the prevention and treatment of AIDS and malnutrition in Africa. Since 2001, he has undertaken dozens of missions to countries of sub-Saharan Africa to activate nursing clinics and telemedicine services. Dr. Bartolo is Secretary General of Global Health Telemedicine, a non-profit organization for multidisciplinary teleconsultation services in Africa that has conducted over 3000 teleconsultations in less than 2 years. He is a member of the Executive Board of the Italian Society of Telemedicine. Dr. Bartolo has published dozens of scientific papers on microcirculation and microlymphography and contributed a number of book chapters on subjects relating to telemedicine.

Fabio Ferrari graduated in Medicine and Surgery cum laude at the University La Sapienza of Rome in 2009. He obtained a Master’s in Emergency Medicine, with honors, from the same university in 2011. He then attended the 3-year school in General Medicine at the Hospital San Giovanni in Rome, graduating in 2014. He is currently a general practitioner in Rome and also attends the school of Radiodiagnostics at the University La Sapienza of Rome. Dr. Ferrari collaborates with the DREAM Project of the Community of Sant'Egidio for the prevention and treatment of malnutrition and AIDS in sub-Saharan Africa and has worked with Global Health Telemedicine (GHT) since its foundation in 2013. He has reported hundreds of teleconsultations from more than 15 sub-Saharan countries thanks to the platform invented and developed by GHT, which enables local doctors to request, via the web and in real time, a second opinion from specialist physicians in Italy.