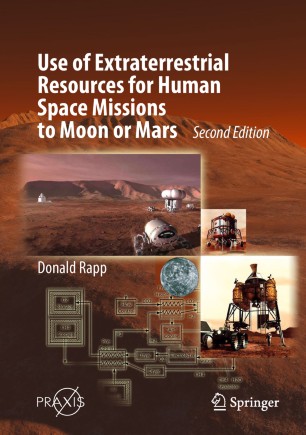 This book presents a detailed, independent review of essentially all the technical aspects of “in situ resource utilization” (ISRU), offering the first in-depth discussion of the issues of crew size, ascent from Mars, and ISRU processes. It also provides data on lunar ISRU not previously available to the public.

This new edition provides a short synopsis of the Mars mission, and discusses various topics, including solid oxide electrolysis, which promises to be an important part of the ISRU picture. In addition, it explores ancillary needs for Mars ISRU and how to obtain water on Mars.

It is the go-to resource for professionals involved in planning space missions or working on ISRU processes, as well as students planning careers in space technology.

Donald Rapp was manager of the Mars Exploration Technology Program at JPL for a period, and he was manager of the In Situ Propellant Production (ISPP) task in this Program. He wrote a landmark report on converting Mars resources into usable propellants for return to Earth. He wrote the Mars Technology Program Plan in 2001.
During the period 2001-2002, he played an important role in JPL efforts in developing concepts for utilization of extraterrestrial resources in Mars missions. In 2002 he wrote the NASA Office of Space Science Technology Blueprint for Harley Thronson, NASA Technology Director, a 100-page assessment of technology needs and capabilities for future missions.
In the period 2003-2006, he prepared a revised and expanded version of the Technology Blueprint for Harley Thronson at NASA HQ. In 2004, he was Proposal Manager for a proposal for a ground-penetrating radar experiment for the Mars Science Laboratory.
In the period 2004-2006, he concentrated on mission design for Mars and lunar human missions. This work led to his writing the book Human Missions to Mars that was published by Praxis/Springer in 2007. This is a major work, comprising 520 pages with over 200 figures. It includes a chapter on in situ resource utilization (ISRU) on Mars.
He was the lead person at JPL for ISRU technology for several decades. In this role, he carried out research and analysis leading to a number or reports and publications through the 1980s, 1990s and into the 2000s.