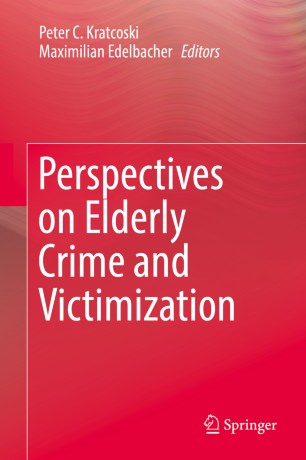 Perspectives on Elderly Crime and Victimization

This textbook focuses on the criminality and victimization of the elderly population. It provides a global perspective on the extent of elderly crime and victimization, with international comparisons for addressing the problem. It explores the extent and types of crimes committed by the elderly, the characteristics of older criminals, and the responses of the criminal justice system (including prisons and institutions) to elderly criminals, including: diversion programs, community-based treatment programs, and special programs including health & mental health care services for older prisoners.

The second part of the book covers victimization of the elderly. Research findings show that certain crimes including fraud, theft, and certain types of financial crimes disproportionately affect older people, and these types of crimes are growing in prevalence. This work explores the characteristics of older victims and the types of crimes that affect them.

Finally, the book presents comparative international research on approaches to crime prevention, education, and legislation to address the victimization of the elderly. This work will be of interest to students in criminology and criminal justice, as well as related fields such as sociology, and gerontology.

Peter C. Kratcoski earned  a PhD in sociology from the Pennsylvania State University, University Park,  Pennsylvania, a MA in sociology from the University of Notre Dame, Notre Dame, Indiana, and a BA in sociology from King’s College, Wilkes-Barre, Pennsylvania.  He was selected for several post-doctoral grants by the National Science Foundation. He taught at the College of St. Thomas, St Paul, Minnesota, and at the Pennsylvania State University before assuming the position of assistant professor of sociology at Kent State University in 1969. He retired as professor of criminal justice studies and chairman of the Department of Criminal Justice Studies at Kent State in 1997, where he is currently a professor emeritus and adjunct professor. He has published many books, chapters in books, and journal articles in the areas of juvenile delinquency, juvenile justice, international policing, crime prevention, corrections and victimology. His most recent writing and research has centered on juvenile justice, collaborative policing, correctional counseling, financial crimes, corruption and fraud and victimization of the elderly. He is co-editor of  Collaborative Policing CRC Press (2016), co-editor of Corruption, Fraud, Organized Crime, and the Shadow Economy, CRC Press (2016) and author of Correctional Counseling and Treatment,  (6th edition), Springer, 2017.
Maximilian Edelbacher graduated from Vienna University (Mag, Jur.) and was Hofrat of the Federal Police of Austria, chief of the Major Crime Bureau, and an international expert for the Council of Europe, OSCE, and UNO. He also chaired the Austrian Antifraud Insurance Bureau and has lectured at several universities, including the Vienna University of Economics and Business Administration, Danube University in Krems, Kent State University in the U.S.A., and Vienna University, Department of Sociology. He was appointed as special investigator of the AVUS Group on white collar crime cases, served as vice president of the Vienna Liaison Office  of the Academic Council on the United Nations, and is a director of the International Police Executive Symposium. He is the author of a number of books and journal articles. His most recent publications include co-editor of Corruption, Fraud, Organized Crime, and the Shadow Economy, CRC Press, 2016 and co-editor of Collaborative Policing, CRC Press, 2016.