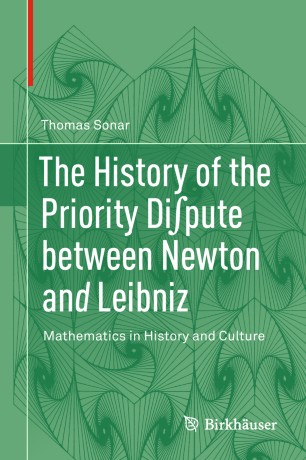 The History of the Priority Di∫pute between Newton and Leibniz

Mathematics in History and Culture

This book provides a thrilling history of the famous priority dispute between Gottfried Wilhelm Leibniz and Isaac Newton, presenting the episode for the first time in the context of cultural history. It introduces readers to the background of the dispute, details its escalation, and discusses the aftermath of the big divide, which extended well into recent times.
One of the unique features of the book is that the mathematics behind the story is very intelligibly explained – an approach that offers general readers interested in the history of sciences and mathematics a window into the world of these two giants in their field.
From the epilogue to the German edition by Eberhard Knobloch:
Thomas Sonar has traced the emergence and the escalation of this conflict, which was heightened by Leibniz’s rejection of Newton’s gravitation theory, in a grandiose, excitingly written monograph. With absolute competence, he also explains the mathematical context so that non-mathematicians will also profit from the book. Quod erat demonstrandum!

From the reviews for the German language edition

….. This book provides a vivid and easy-reading picture of many political and scientific aspects of the end of the 17th and the beginning of the 18th century, and constitutes an excellent guide to the existing secondary literature for laymen as well as for specialists….

“The reading of this book is recommendable because the precision in describing the most important mathematical aspects behind the dispute Newton-Leibniz, the attentive examination of the protagonists of the story, both from a scientific and a personal-psychological point of view, the thorough description of the relations-net behind such a dispute. Furthermore, the general scenario of this so turbulent and fundamental period for European mathematics and science is well described.” (Paolo Bussotti, zbMATH 1400.01003, 2019)

“The author’s style of writing is vivid, interesting and accessible. Other good features of the book include numerous photographs and illustrations (many in color), and an extensive ten-page, small print, list of references. … I look forward to the publication of other books in this series. … It belongs on the shelf of anybody interested in the history of calculus, and it certainly belongs in any good university library.” (Mark Hunacek, MAA Reviews, June, 2018)