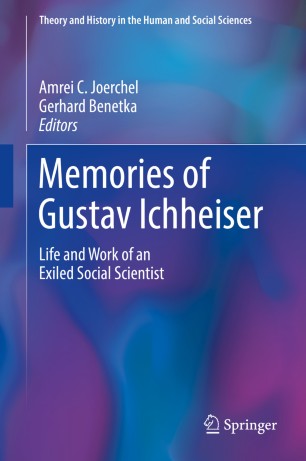 Life and Work of an Exiled Social Scientist

This book presents an overview of the life and work of Gustav Ichheiser, a social scientist in Vienna during the early 20th century. Gustav Ichheiser, along with many other Austrian Jews of his time, was forced into exile after the rise of National Socialism in Europe. Ichheiser's work is considered an important front runner to the attribution theories. He was one of the first to study the phenomena of social misunderstandings in detail and in relation to concrete problem areas, such as success.

The aim of this book is to discuss, on an international level, the importance of Ichheiser's theoretical approaches in his time and their relevance in today's context of social and cultural psychology. In addition, the tragic course of Ichheiser’s biography, an example for many displaced scientists, highlights the importance of bringing a scientist’s work back into the focus of today’s current social scientific setting.

Memories of Gustav Ichheiser will be of interest to researchers as well as undergraduate and graduate students in the fields of psychology, social psychology, sociology, and psychiatry.

Amrei C. Joerchel, Ph.D., was a lecture and a research assistant at the Sigmund Freud University, Vienna until 2017 and is now a program supervisor at the Center for Social Dynamics in the Bay Area, CA, USA, where she was appointed to develop a research division. She is the author of several peer review articles and the co-editor of Biographical Ruptures and their Repairs: Cultural Transitions in Development, published 2014.

Gerhard Benetka is a  Professor of Pscyhology and Dean of the Faculty of Psychology at the Sigmund Freud Private University in Vienna.