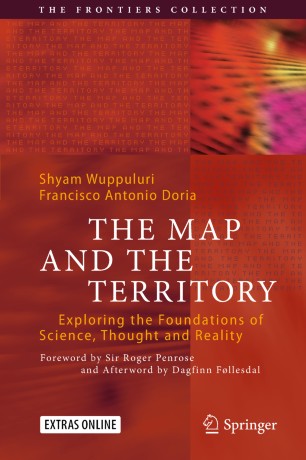 The Map and the Territory

Exploring the Foundations of Science, Thought and Reality

The Map/Territory distinction is a foundational part of the scientific method and, in fact, underlies all of thought, and even reality itself. This fascinating and fundamental topic is addressed here by some of the world’s leading thinkers and intellectual giants, whose accessible essays cover six and more fields of endeavor.
It is imperative to distinguish the Map from the Territory when analyzing any subject, yet we often mistake the map for the territory; the meaning for the reference; a computational tool for what it computes. Representations are so handy and tempting that we often end up committing the category error of over-associating the representation with the thing it represents, so much so that the distinction between them is lost. This error, whose roots frequently lie in pedagogy, generates a plethora of paradoxes/confusions which hinder a proper understanding of the subject. What are wave functions? Fields? Forces? Numbers? Sets? Classes? Operators? Functions? Alphabets and Sentences? Are they a part of our map (theory/representation)? Or do they actually belong to the territory (reality)? A researcher, like a cartographer, clothes (or creates?) the reality by stitching together numerous co-existing maps. Is there a reality out there apart from these maps? How do these various maps interact or combine with each other to produce a coherent reality that we interact with? Or do they not?
Does our brain use its own internal maps to facilitate the “physicist/mathematician” in us to construct, in turn, the maps about the external realm? If so, what is the nature of these internal maps? Are there meta-maps? Evolution definitely fences in our perception and thereby our ability to construct maps, revealing to us only those aspects beneficial for our survival. But to what extent? Is there a way out of this metaphorical Plato’s cave erected around us by the nature? Alfred Korzybski once remarked “The Map is not the Territory”: Join us in this journey to explore the many questions, concepts and interpretations that this claim engenders.

Shyam Wuppuluri is an independent researcher working in the domain of foundations of science. His research interests range from philosophy to theoretical physics, mathematics and cognitive science. He is the recipient of Honra ao Mérito from the Brazilian Academy of Philosophy (Academia Brasileira de Filosofia) and has been a corresponding member of the academy since 2018. He is also the recipient of the prestigious Albert Einstein Fellowship 2020 from the Einstein Forum at Potsdam & Caputh and is a fellow of Royal Society of Arts. He is the instigating editor of several highly interdisciplinary volumes that disseminate and discuss issues underlying the foundations of sciences, and for which he has gathered the world's leading scientists and intellectuals as contributors; among them Noam Chomsky, Sir Roger Penrose, Sir Martin Rees, Daniel Dennett, A. C. Grayling, Nicholas Humphrey, Gregory Chaitin, Gerard 't Hooft, Ian Stewart, Barry Mazur, Stephen Wolfram, Paul Davies, Tyler Burge, Doron Swade, Julian Barbour, Newton Da Costa, Francisco Antonio Doria, Reuben Hersh, Nicholas Maxwell and many others.

Francisco Antonio Doria is a Brazilian physicist. Doria is a Professor Emeritus at the Federal University of Rio de Janeiro, where he currently teaches on the foundations of economic theory at the graduate School of Engineering (UFRJ COPPE). Doria has a B. Sc. in chemical engineering and a PhD in mathematical physics (under the guidance of Leopoldo Nachbin). He has made contributions to the gauge field copy problem in quantum field theory and proved with Newton da Costa several incompleteness theorems in mathematics, physics and mathematical economics, including the undecidability of chaos theory. Doria is a member of the Brazilian Academy of Philosophy, was a Senior Fulbright Scholar at Stanford University, 1989-1990, and a visiting researcher at the mathematics department, University of Rochester, 1979-1981. He thinks of himself as a philosopher and literary scholar with a humanist education, and has had as students Marcelo Gleiser and José Acacio de Barros, among other noted researchers. He likes to trace his interdisciplinary interests to a 17th century relative, the noted Portuguese writer Father Antonio Vieira (1608-1697).