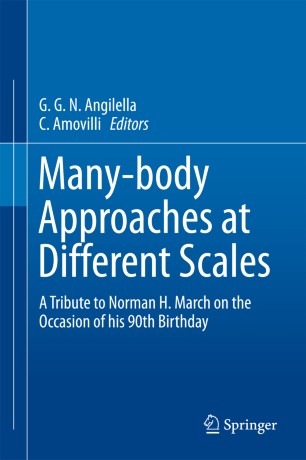 A Tribute to Norman H. March on the Occasion of his 90th Birthday

This book presents a collection of invited research and review contributions on recent advances in (mainly) theoretical condensed matter physics, theoretical chemistry, and theoretical physics. The volume celebrates the 90th birthday of N.H. March (Emeritus Professor, Oxford University, UK), a prominent figure in all of these fields. Given the broad range of interests in the research activity of Professor March, who collaborated with a number of eminent scientists in physics and chemistry, the volume embraces quite diverse topics in physics and chemistry, at various dimensions and energy scales. One thread connecting all these topics is correlation in aggregated states of matter, ranging from nuclear physics to molecules, clusters, disordered condensed phases such as the liquid state, and solid state physics, and the various phase transitions, both structural and electronic, occurring therein. A final chapter leaps to an even larger scale of matter aggregation, namely the universe and gravitation. A further no less important common thread is methodological, with the application of theoretical physics and chemistry, particularly density functional theory and statistical field theory, to both nuclear and condensed matter.