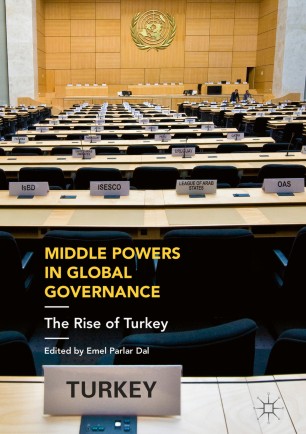 The Rise of Turkey

Emel Parlar Dal is Associate Professor in the Department of International Relations at Marmara University, Turkey.

“This is a timely book which adapts the middle-powers concept to a changing world by demonstrating the new opportunities opening up to emerging middle powers, along with the challenges they face. It highlights the tensions between the overlapping global and regional roles and strategies of middle powers. Within this framework the book contributes to a better understanding of the foreign policy of Turkey as an imperfect middle power.” (Detlef Nolte, GIGA German Institute of Global and Area Studies, Germany)

“Professor Emel Parlar Dal has provided an insightful and timely contribution to the study of Turkey’s evolving role in the global system. With its innovative use of conceptual modes of analysis and rich detail on specific issue areas, this book deserves a wide readership and deep attention.” (Andrew F. Cooper, Professor, Balsillie School of International Affairs and Department of Political Science, University of Waterloo, Canada, and Associate Research Fellow, UNU-CRIS (Institute on Comparative Regional Integration), Belgium)

“This is a timely and important book. The collection's various in-depth studies of Turkey's foreign relations are valuable, but of even more significance is the book's attempt to get at the broader issue of the increasingly fraught relations between emerging middle powers and the West. The book is a must for students of middle powers, global governance, and the foreign policies of developing countries.” (Eduard Jordaan, Senior Lecturer, Department of Political and International Studies, Rhodes University, South Africa)