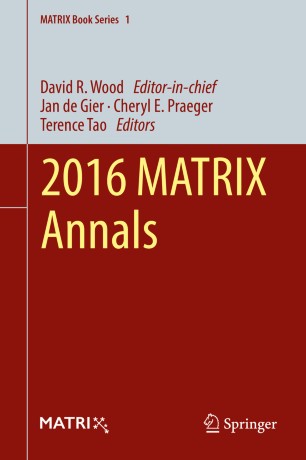 MATRIX is Australia’s international, residential mathematical research institute. It facilitates new collaborations and mathematical advances through intensive residential research programs, each lasting 1-4 weeks. This book is a scientific record of the five programs held at MATRIX in its first year, 2016:

- Higher Structures in Geometry and Physics

The MATRIX Scientific Committee selected these programs based on their scientific excellence and the participation rate of high-profile international participants. Each program included ample unstructured time to encourage collaborative research; some of the longer programs also included an embedded conference or lecture series.

Jan de Gier is co-Director of MATRIX, and Professor and Head of the School of Mathematics and Statistics at the University of Melbourne. He is also Chief Investigator of the ARC Centre of Excellence for Mathematical and Statistical Frontiers. Jan’s main research areas are mathematical physics, statistical mechanics, interacting particle systems, solvable lattice models, representation theory and multivariable polynomials. He also studies applications of stochastic particle systems to real world traffic modelling.

Cheryl Praeger AM FAA is Emeritus Professor of Mathematics at the University of Western Australia. She is former Foreign Secretary of the Australian Academy of Science, former Member-at-Large of the Executive of the International Mathematical Union, former ARC Federation Fellow, and was the inaugural Director of the UWA Centre for the Mathematics of Symmetry and Computation. Cheryl’s research has focused on the theory of group actions and their applications in algebraic graph theory and for combinatorial designs; and algorithms for group computation including questions in statistical group theory and algorithmic complexity.

Terence Tao FAA FRS is an Australian-American mathematician who works in harmonic analysis, partial differential equations, algebraic combinatorics, arithmetic combinatorics, geometric combinatorics, compressed sensing and analytic number theory. He holds the James and Carol Collins chair in mathematics at the University of California, Los Angeles. Tao was a co t of the 2006 Fields Medal and the 2014 Breakthrough Prize in Mathematics.