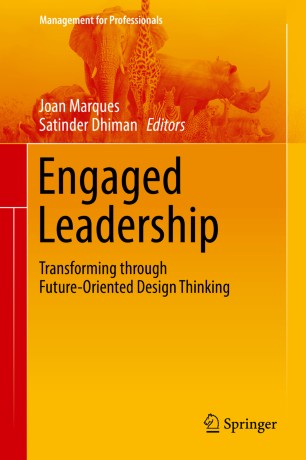 Part of the Management for Professionals book series (MANAGPROF)

This professional book examines the concept of engaged leadership. Specifically, it focuses on the need for leaders in personal and professional realms, for-profit and non-profit, to understand the importance of engagement in order to achieve enhanced satisfaction and motivation among stakeholders (including employees, shareholders, investors, supporters, customers, suppliers, the community, competitors, family, and partners), and hence, an augmented level of designed thinking, which leads to increased innovation and on-going leadership development. Divided into three sections—engaged leadership development at the personal level, implementation at the organizational level, and manifestation in practice—this book provides professionals, practitioners and policy makers as well as students with the tools and skills to lead actively and conscientiously and help them understand the importance of creativity and compassion for development.

Engaged leadership operates on the fundamental principle that leaders have to first and foremost perceive themselves as leaders, and then engage in design thinking, as they will need to develop strategies to reach, encourage, and positively appeal to these stakeholder groups. Leadership is neither limited to those holding formal managerial position, nor to any particular setting. Leaders can be found everywhere, in all layers of society. Leadership is only possible, however, if one dares to perceive and define oneself as a leader. And only when leadership is adopted as a reality within one’s personal perception, can engaged leadership be applied.

Featuring contributions from academics, scholars, and professionals from around the world, each providing cases, interactive questions and reflective notes, this book will be of interest to professionals, practitioners, policy makers, students and scholars interested in creative leadership, management, organizational behavior, and governance.

Joan has authored, co-authored, and co-edited more than 18 books on management and leadership topics, including Ethical Leadership: Progress with a Moral Compass (2017), in which she focuses on the need to reconsider our notion of “progress”, and  Leadership: Finding Balance between Ambition and Acceptance (2016), in which she discusses the art of responsibly balancing critical traits and behaviors. She is also the author of Leadership and Mindful Behavior: Action, Wakefulness and Business (2014), Courage in the Twenty-First Century (2013) and The Awakened Leader (2007), and co-author of, among others, Leadership Today (2016), Leading Spiritually (2014), Business Administration Education (2012), Laughter is the Best Teacher (2011), Stories to Tell Your OB Students (2011), From Me to We (2011), Managing in the 21st Century (2011), The Workplace and Spirituality (2009), and Spirituality in the Workplace (2007).

Joan is a Co-Founder and Editor-in-Chief of three scholarly journals: The Business Renaissance Quarterly, Journal of Global Business Issues, and Interbeing, Journal of Personal and Professional Mastery. She has presented a weekly radio program entitled “De Andere Kant” (The Other Side) on Mart Radio, Amsterdam, The Netherlands, for the past 15 years, and has been a long-time columnist for De Ware Tijd (The True Times), one of the largest newspapers in Paramaribo, Suriname. More info about Joan Marques is available on her website, joanmarques.com

Satinder Dhiman currently serves as a Professor of Management and as the Associate Dean, Chair, and Director of the MBA Program at Woodbury University’s School of Business in Burbank, California. He has served as the Chair for a special MBA Program for Mercedes-Benz Executives, China.  He also consults as Accreditation Mentor and Site Visit Team Leader for the Accreditation Council for Business Schools and Programs (ACBSP) for various universities in America, Canada, Europe, and India. He has been elected as the President of International Chamber for Service Industry (ICSI), 2014-2016. He has also completed advanced Executive Leadership Programs at Harvard, Stanford, and Wharton.

Recipient of several national and international academic and professional honors, Satinder won the Woodbury University Ambassador of the Year Award in 2015; Steve Allen Excellence in Education Award in 2006, and the prestigious ACBSP International Teacher of the Year Award in 2004.  In 2013, Satinder was invited to be the opening speaker at the prestigious TEDx Conference @ College of the Canyons in Santa Clarita, California.  He is the Founder and Director of Forever Fulfilled, a Los Angeles-based Wellbeing Consultancy, which focuses on workplace wellness and self-leadership.

Satinder’s work has been published in multiple national and international journals, and he has authored, co-authored, and co-edited ten books on management and leadership during the last 7 years.  His current research on fulfillment, which is also the theme of his book, Seven Habits of Highly Fulfilled People (2012/2014), is focused on transformative habits of mind for attaining lasting joy and fulfillment in both personal and professional life. In his most recent book, Gandhi and Leadership (2015), Satinder offers perceptive insights into the spiritual and moral mainstay of Gandhi’s exemplary leadership and its abiding influence on the world today.