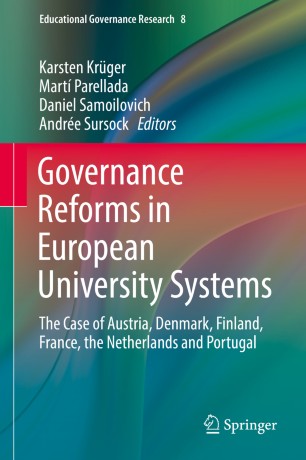 The Case of Austria, Denmark, Finland, France, the Netherlands and Portugal

This book examines governance reforms in higher education in six European countries: Austria, Denmark, Finland, France, The Netherlands, and Portugal. It focuses in particular on the governance of the systems and institutions in these countries. The book shows that each of the national reform processes has been characterised by its own specific pathways embedded in the country’s specific socio-economic contexts and cultures, but also has a number of features in common with the other countries and processes. The first chapter of the book presents a conceptual framework to analyse the reform processes as an ’implementation game’ played by several actors with diverse interests. The second chapter describes the national reform processes of the six selected countries, giving a voice to the individual university rectors and officials who played an important role during the reform processes. Their stories constitute a vivid narrative of the government drivers of reform and of the rationales of the institutions as main partners in the reform processes. These narratives are analysed, complemented by, and contrasted with a review of the literature on the subject in the third chapter. The final chapter consist of concluding remarks and lessons learned.