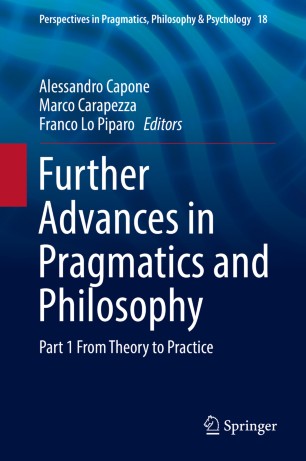 Further Advances in Pragmatics and Philosophy

Part 1 From Theory to Practice

This book builds on the idea that pragmatics and philosophy are strictly interconnected and that advances in one area will generate consequential advantages in the other area. The first part of the book, entitled ‘Theoretical Approaches to Philosophy of Language’, contains contributions by philosophers of language on connectives, intensional contexts, demonstratives, subsententials, and implicit indirect reports. The second part, ‘Pragmatics in Discourse’, presents contributions that are more empirically based or of a more applicative nature and that deal with the pragmatics of discourse, argumentation, pragmatics and law, and context.

The book presents perspectives which, generally, make most of the Gricean idea of the centrality of a speaker’s intention in attribution of meaning to utterances, whether one is interested in the level of sentence-like units or larger chunks of discourse.

“In this exciting and challenging contribution, we find ourselves at the front-line of topical issues at the intersection of semantics and pragmatics: the contribution addresses classical ‘Gricean’ puzzles as well as more contemporary issues that upset the boundaries between linguistic meaning, truth, language use, and the broader aspects of discourse. The volume brings together a host of timely language research that contributes to classical debates, while opening up new avenues of exploration from a theoretical and practical vantage, respectively. The contribution is a beneficial read for philosophers of language, linguists as well as the wider community of language researchers.” (Chris Genovesi, Carleton University, USA)
Buy options