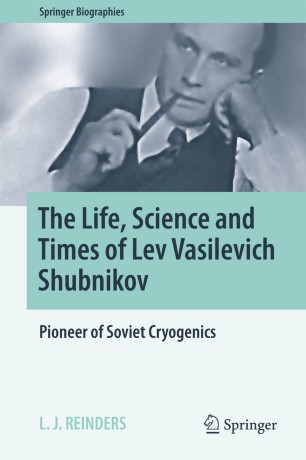 The Life, Science and Times of Lev Vasilevich Shubnikov

This book describes the life, times and science of the Soviet physicist Lev Vasilevich Shubnikov (1901-1937).  From 1926 to 1930 Shubnikov worked in Leiden where he was the co-discoverer of the Shubnikov-De Haas effect. After his return to the Soviet Union he founded in Kharkov in Ukraine the first low-temperature laboratory in the Soviet Union, which in a very short time became the foremost physics institute in the country and among other things led to the discovery of type-II superconductivity. In August 1937 Shubnikov, together with many of his colleagues, was arrested and shot early in November 1937. This gripping story gives deep insights into the pioneering work of Soviet physicists before the Second World War, as well as providing much previously unpublished information about their brutal treatment at the hands of the Stalinist regime.

L. J. Reinders has had an active career in high-energy physics, earning a PhD from Utrecht University in 1976 and working as a post-doc at various research centres in Europe and Japan until 1988, when he switched to law and legal translation. In this book he combines his earlier expertise as a physicist with his long-standing interest in Russian culture and science.

“Based on thorough document research and a collection of memories from people who knew Shubnikov, this book will appeal not only to those curious about this physicist, but also to readers interested in the history of Soviet science, especially the development of Soviet physics in the 1930s and the impact that Stalin's regime had on it.” (Virginia Greco, CERN Courier, March, 2019)
Buy options