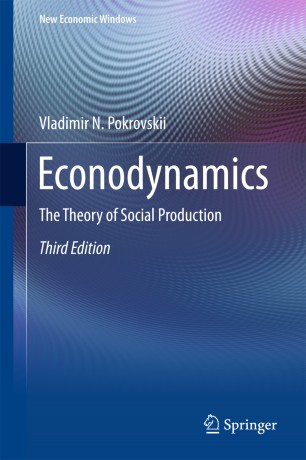 The Theory of Social Production

This book, now in its third edition, explores how human populations grow, based on their creative abilities.  To reconsider the theory of economic growth from a physicist's perspective, the book analyses the concepts of value and utility and their relationship to thermodynamic concepts. This approach allows the author to include characteristics of technology in descriptions of development and to formulate a phenomenological (macroeconomic, no-price fluctuations are discussed) theory of production as a set of evolutionary equations in one-sector and multi-sector approximations. The theory is proved to be useful for describing both national economies and global production in ancient times.

This monograph presents the topics in a compact and consistent manner and can be used by students with a background in physics and other natural sciences who wish to specialize in economics. It explains how the growth of production is connected with advances in technology, consumption of labour and energy and makes it possible to analyse past and present social production systems and to build scripts of future progress. The book is of interest to energy specialists engaged in planning and analyzing the production and consumption of energy carriers, and to economists wanting to know how energy and technology affect economic growth.

This third edition has been substantially revised and three brand new chapters have been added. Chapter 8 illustrates the robustness of the theory with the aid of statistical historical data from the Russian economy, while Chapter 12 is devoted to a reconstruction of the global production activity in ancient times. Chapter 13 discusses the principles of the organization of social production.

Vladimir Pokrovskii has a title Professor of  Applied Mathematics and the Russian degree Doctor  of Sciences (Phys. and Math.).  He is  an expert in  mathematical modelling of complex natural and social systems.  Graduated from the  Tomsk State University,  Department of  Theoretical Physics. The qualification has got in the Institute  of Chemical Physics,  Аcademy of Sciences  of the USSR, investigating behaviour of suspensions and polymers. It is known as a prominent researcher of dynamics of polymers: the second edition of his monograph The Mesoscopic Theory of Polymer Dynamics, published  by  Springer in 2010, is included in the list of Best Reference Books on Polymer Dynamics,  used by students of top universities, institutes and colleges. Worked as Professor and Head of Department of Applied Mathematics at Altai Technical University (Barnaul, Russia) and  at Moscow University of Economics and Statistics.    His  interests are broad: to his  students of Applied Mathematics, he delivered original course  of lectures Methods of the mathematical modelling  (published in Russian as Introduction to Thermodynamics of Complex Systems) that include classical examples from areas of mechanics, physics, chemistry, biology and economy. Persistent attempts to understand essence of economic processes have given a material for book Econodynamics. The Theory of Social Production, the third Edition of which is  offered to the readers.