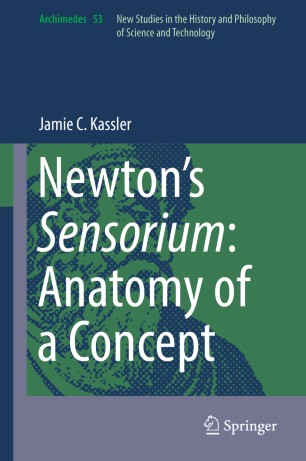 Newton’s Sensorium: Anatomy of a Concept

In the writings that Newton intended for a public audience, he used the term 'sensorium' in relation to both humans and God. But in the writings of commentators, it has been little recognised that these two usages form a complete concept, so that even today there is no consensus about the meaning of his term. This book, which is written as a process of discovery, not a thesis to be demonstrated, represents the first systematic investigation of the two parts of Newton's sensorium concept, which is a construct, that is, a concept specially devised for a theory. Therefore, the author sought to discover the meaning of his complete sensorium concept, as well as the model that underlies it, beginning with the human sensorium. This part of his concept is situated, first, in the context of Newton's published writings and, then, in the context of the writings of his contemporaries, William Briggs and Thomas Willis, two English physicians who were at the forefront of their respective specialties, ophthalmology and neurology. Only then is it possible to generalise to the divine sensorium, because Newton's method of reasoning from experience requires that the second part of his concept is last in the order of knowledge. And the reason for this sequence is that Newton's method, which he sometimes referred to as the 'analogy of nature', proceeds from that which has been observed to be universally true to that which is beyond the limits of observation. Consequently, generalisation passes insensibly into reasoning by analogy.

During the discovery process, a number of widespread assumptions are called into question, including that Newton can be classed as a theological voluntarist for whom will is superior to intellect, or that, for Newton, not only the material world but also God occupies the whole extent of infinite space. The insights afforded through this book will appeal to historians of natural philosophy and philosophy of mind.

In 1991 the author was elected a Fellow (1991) of the Australian Academy of the Humanities for contributions to musicological theory; in 2003 she was a recipient of the Centenary Medal for services to Australian Society and the Humanities in the Study of Philosophy.