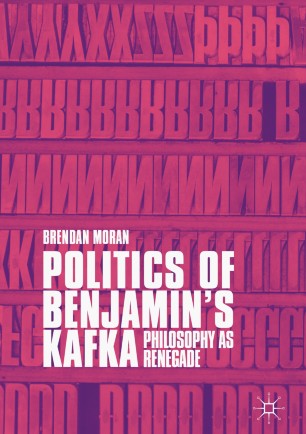 Brendan Moran is Associate Professor of Philosophy, University of Calgary, Canada. His publications include a book on Benjamin’s early writings, and articles on Benjamin, Agamben, Laruelle, Heidegger, Levinas, and Salomo Friedlaender.  He  has also co-edited two books with Carlo Salzani, Philosophy and Kafka, and Towards the Critique of Violence: Walter Benjamin and Giorgio Agamben.

“This book makes a compelling case for the philosophic importance of Benjamin’s work, in its paradoxical literary and political resonance. At the same time, it mounts a highly original, well-informed interpretation and critique of Benjamin’s evolving engagement with Kafka. Moran’s writing—in which terms such as ‘shame’, ‘waywardness’, and ‘distraction’ become renegade philosophemes—has a rare gravity and urgency.” (Howard Eiland, co-author of Walter Benjamin: A Critical Life)

“Kafka is certainly Walter Benjamin’s greatest muse but the connection between these thinkers is not always clear. Brendan Moran has written this terrific book to help elucidate both the connection between these writers and to think more about each author in turn. Via their connection, Moran expresses the sharp pointed edge of Benjamin’s politics, a politics that is both renegade and actionable. The Politics of Benjamin’s Kafka is therefore a critical text for thinking about how philosophy might yet change the world.” (James Martel, Chair of the Department of Political Science, San Francisco State University, USA)

“Brendan Moran's study presents a comprehensive investigation of Walter Benjamin’s ‘Kafkan’ politics, envisioned as a political philosophy of non-closure partly influenced by, but ultimately critical and subversive of, mythic structures as authoritarian modes of thinking. Meticulously researched, this volume contextualizes Benjamin’s readings of Kafka in a broad spectrum of intellectual traditions. Moran's study will resonate with anyone interested in intersections between political philosophy, literary criticism, and cultural studies.” (Rolf J. Goebel, Distinguished Professor of German, University of Alabama in Huntsville, USA)

“Brendan Moran’s book is perhaps the most valuable study of Walter Benjamin’s politics yet to have appeared. Combining an intimate knowledge of his texts with a a critical awareness of contemporary philosophical debate, it shows how Benjamin’s reading of Kafka opens up the only politics worth the name: a politics of shame.” (Irving Wohlfarth, former Director of the Comparative Literature Program at the University of Oregon, USA)