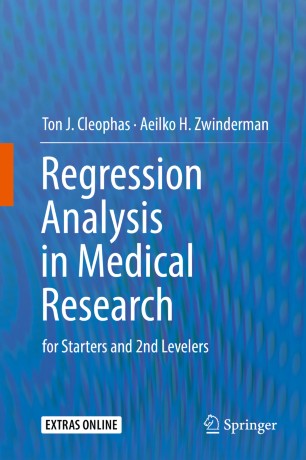 for Starters and 2nd Levelers

This edition is a pretty complete textbook and tutorial for medical and health care students, as well as a recollection/update bench, and help desk for professionals. Novel approaches already applied in published clinical research will be addressed: matrix analyses, alpha spending, gate keeping, kriging, interval censored regressions, causality regressions, canonical regressions, quasi-likelihood regressions, novel non-parametric regressions. Each chapter can be studied as a stand-alone, and covers one field in the fast growing world of regression analyses.

The authors, as professors in statistics and machine learning at European universities, are worried, that their students find regression-analyses harder than any other methodology in statistics. This is serious, because almost all of the novel methodologies in current data mining and data analysis include elements of regression-analysis. It is the main incentive for writing this 28 chapter edition, consistent of

- their applications in medical and health research as published so far,

- step by step analyses for self-assessment,

Traditional regression analysis is adequate for epidemiology, but lacks the precision required for clinical investigations. However, in the past two decades modern regression methods have proven to be much more precise. And so it is time, that a book described regression analyses for clinicians. The current edition is the first to do so. It is written for a non-mathematical readership. Self-assessment data-files are provided through Springer' s "Extras Online".

The authors are well-qualified in their field. Professor Zwinderman is past-president of the International Society of Biostatistics (2012-2015), and Professor Cleophas is past-president of the American College of Angiology (2000-2002).
Professor Zwinderman is one of the Principle Investigators of the Academic Medical Center Amsterdam, and his research is concerned with developing statistical methods for new research designs in biomedical science, particularly integrating omics data, like genomics, proteomics, metabolomics, and analysis tools based on parallel computing and the use of cluster computers and grid computing.
Professor Cleophas is a member of the Academic Committee of the European College of Pharmaceutical Medicine, that provides, on behalf of 22 European Universities, the Master-ship trainings  "Pharmaceutical Medicine" and "Medicines Development".
From their expertise they should be able to make adequate selections of modern methods for clinical data analysis for the benefit of physicians, students, and investigators. The authors have been working and publishing together for 18 years, and their research can be characterized as a continued effort to demonstrate that clinical data analysis is not mathematics but rather a discipline at the interface of biology and mathematics.
The authors as professors and teachers in statistics at universities in The Netherlands and France for the most part of their lives, are concerned, that their students find regression-analyses harder than any other methodology in statistics. This is serious, because almost all of the novel methodologies in current data mining and data analysis include elements of regression-analysis, and they do hope that the current production "Regression Analysis for Starters and 2nd Levelers" will be a helpful companion for the purpose.
Five textbooks complementary to the current production and written by the same authors are
Statistics applied to clinical studies 5th edition, 2012,
Machine learning in medicine a complete overview, 2015,
SPSS for starters and 2nd levelers 2nd edition, 2015,
Clinical data analysis on a pocket calculator 2nd edition, 2016,
Modern Meta-analysis, 2017, all of them published by Springer

“This is a comprehensive book on various types of theoretical, basic, and applied regression analysis in medical research. … There are sufficient examples in each chapter to enable better understanding of theory. … Each chapter has numerous graphs and tables, which are easy to understand and nicely detailed. This is an excellent reference for medical students, researchers in medicine, and healthcare professionals who want either a basic or an advanced understanding and interpretation of all types of regression analysis.” (Timir Paul, Doody's Book Reviews, April, 2018)
Buy options