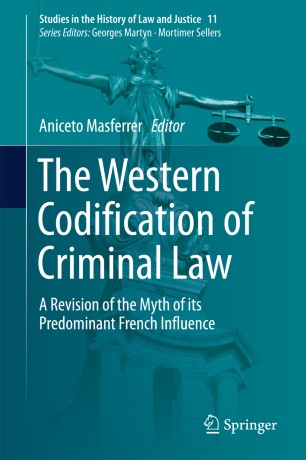 The Western Codification of Criminal Law

A Revision of the Myth of its Predominant French Influence

Part of the Studies in the History of Law and Justice book series (SHLJ, volume 11)

This volume addresses an important historiographical gap by assessing the respective contributions of tradition and foreign influences to the 19th century codification of criminal law. More specifically, it focuses on the extent of French influence – among others – in European and American civil law jurisdictions. In this regard, the book seeks to dispel a number of myths concerning the French model’s actual influence on European and Latin American criminal codes.

The impact of the Napoleonic criminal code on other jurisdictions was real, but the scope and extent of its influence were significantly less than has sometimes been claimed. The overemphasis on French influence on other civil law jurisdictions is partly due to a fundamental assumption that modern criminal codes constituted a break with the past. The question as to whether they truly broke with the past or were merely a degree of reform touches on a difficult issue, namely, the dichotomy between tradition and foreign influences in the codification of criminal law. Scholarship has unfairly ignored this important subject, an oversight that this book remedies.