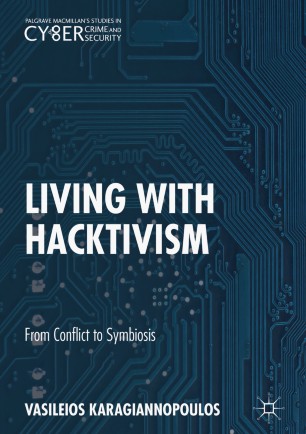 From Conflict to Symbiosis

This book focuses on the phenomenon of hacktivism and how it has been dealt with up to now in the United States and the United Kingdom. After discussing the birth of the phenomenon and the various relevant groups, from Electronic Disturbance Theater to Anonymous, their philosophies and tactics, this timely and original work attempts to identify the positive and negative aspects hacktivism through an analysis of free speech and civil disobedience theory. Engaging in this process clarifies the dual nature of hacktivism, highlighting its potential for positive contributions to contemporary politics, whilst also demonstrating the risks and harms flowing from its controversial and legally ambiguous nature. Based on this hybrid nature of hacktivism, Karagiannopoulos proceeds to offer a critique of the current responses towards such practices and their potential for preserving the positive elements, whilst mitigating the risks and harms involved in such political practices. Finally, the study focuses on identifying an alternative, symbiotic rationale for responding to hacktivism, based on a cluster of micro-interventions moving away from the conflict-based criminal justice model and the potentially unjust and inefficacious results it entails.

Vasileios Karagiannopoulos is Senior Lecturer in Law and Cybercrime at the Institute of Criminal Justice Studies, University of Portsmouth, UK.

“The book points out fundamental weaknesses in the legislative process through which many hacktivists have been convicted in the US and UK. This can make Karagiannopoulos’s work a valuable resource for social movement and collective action modules, as much as for criminology or terrorism courses. The messages communicated throughout the book should help readers, and especially legislators, come to grips with the normative intricacies of contested online practice and may incentivise further research on best-practice examples … .” (Leonie Maria Tanczer, LSE Review of Books, blogs.lse.ac.uk, August 31, 2018)
Buy options