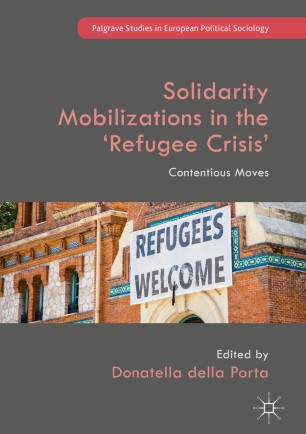 Solidarity Mobilizations in the ‘Refugee Crisis’

This edited collection introduces conceptual innovations that critically engage with understanding refugee movements as part of the broader category of ‘poor people’s movements’. The empirical focus of the work lies on the protest events related to the so-called ‘long summer of migration’ of 2015. It traces the route followed by the migrants from the places of first arrival to the places of passage and on to the places of destination.

Through qualitative and quantitative data, the authors map, within a cross-national comparative perspective, the wide set of actions and initiatives that are being created in solidarity with refugees who have made their journey seeking asylum to the European Union, either travelling across the Mediterranean Sea or through South Eastern Europe. It explores these cases from the perspective of social movement studies alongside critical studies on migration and citizenship.

Donatella della Porta is Professor of Political Science, Dean of the Institute for Humanities and the Social Sciences and Director of the PhD program in Political Science and Sociology at the Scuola Normale Superiore in Florence, Italy, where she also leads the Center on Social Movement Studies (Cosmos).

“This volume is a must read for scholars and students of migration, citizenship and social movements. As an original contribution that bridges theories of social movements and critical citizenship Donatella della Porta and her co-authors trace solidarity with the refugees on their way to the European Union. By combining qualitative and quantitative data and cross-national comparison the authors demonstrate how critical acts of citizenship by migrants are supported by a broad range of initiatives and forms of engagement by citizens in Europe and beyond European and European Union countries.” (Nicole Doerr, Associate Professor, Department of Sociology, University of Copenhagen)

“I can hardly think of a better time for a scholarly analysis of solidarity mobilizations. In a time of profound crisis, both economic and political, across Europe and beyond, such an analysis is more than welcomed. Donatella della Porta has assembled a group of skilled researchers to produce sound, evidence-based analyses of contentious activities by and in favor of migrants during the refugee crisis of 2015. The various chapters in this book show that solidarity if not only a word that is often used only to have a clean conscience, but can become real “acts of citizenship” that may not only lead to positive outcomes but also contributes to reinvigorating democracy. In the process, this book brings the origins of discontent, and more generally the structural reasons of discontent, back in the study of social movements and contentious politics, an aspect that has for too long been put aside by scholars to the benefit of the analysis of opportunities and resources.” (Marco Giugni, Professor, Département de science politique et relations internationales, Université de Genève)

“This is a book of primary importance on one of the most critical issues that Europe is facing today. Through the analysis of diverse cases within and beyond European borders, Donatella della Porta and her colleagues propose for the first time a comprehensive view of how different countries and societies have responded to the so-called “refugee crisis”. What they reveal is how the acts of resistance and solidarity of migrants and activists concretely challenge the exclusionary nature of migration and citizenship policies. The book successfully bridges the literatures on contentious politics and critical citizenship studies, suggesting thus innovative and stimulating theoretical perspectives. The detailed empirical analysis highlights the necessity to give voice to those whose struggles are too often rendered invisible. The book is a much-needed and ground-breaking contribution to both social movements and migration studies.” (Pierre Monforte, Associate Professor, Department of Sociology, University of Leicester)

“This edited volume provides valuable insights into some of the most burning political issues around solidarity mobilizations with refugees and can be strongly recommended to students, activists and policy makers. The theoretical/ methodological approach is innovative bridging social movement and citizenship studies. The empirical chapters present in depth research about the mobilizing for refugees’ rights across Europe in ‘the long summer of migration’ exploring the tensions between ‘acts of solidarity’ and ‘actions of resistance’, as well as between refugee and anti-refugee mobilization. The volume raises key questions about how to overcome the borders between refugees, migrants and citizens, the tensions between the autonomous migrant struggles, struggles against neo-liberalism and exclusive nationalism. It is written by members of a research team under the leadership of Professor Donatella della Porta at the Centre of Social Movement Studies at the Scuola Normale Superiore in Florence.” (Birte Siim, Professor, Institut for Kultur og Globale Studier, Aalborg University)