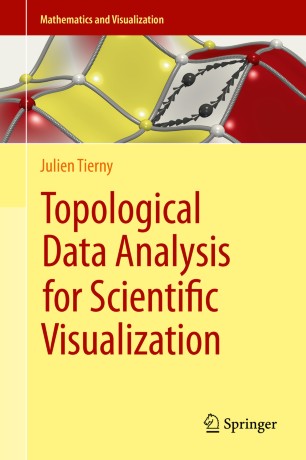 Combining theoretical and practical aspects of topology, this book delivers a comprehensive and self-contained introduction to topological methods for the analysis and visualization of scientific data.

Theoretical concepts are presented in a thorough but intuitive manner, with many high-quality color illustrations. Key algorithms for the computation and simplification of topological data representations are described in details, and their application is carefully illustrated in a chapter dedicated to concrete use cases.

With its fine balance between theory and practice, "Topological Data Analysis for Scientific Visualization" constitutes an appealing introduction to the increasingly important topic of topological data analysis, for lecturers, students and researchers.

Julien Tierny received the Ph.D. degree in Computer Science from Lille 1 University in 2008 and the Habilitation degree (HDR) from Sorbonne Universités UPMC in 2016. He is currently a CNRS permanent research scientist, affiliated with Sorbonne Universities (LIP6, UPMC Paris 6, France) since September 2014 and with Telecom ParisTech from 2010 to 2014. Prior to his CNRS tenure, he held a Fulbright fellowship (U.S. Department of State) and was a post-doctoral research associate at the Scientific Computing and Imaging Institute at the University of Utah. His research expertise includes topological data analysis for scientific visualization. Dr. Julien Tierny received several awards for his research, including best paper awards (IEEE VIS 2017, IEEE VIS 2016, IEEE SciVis Contest 2016, EGPGV 2013). He is the lead developer of the Topology ToolKit (TTK), an open source library for topological data analysis.

“The book under review is built as a systematic textbook that pinpoints the elements of data visualization and offers the theoretical background for this task. … The book is written in an accessible style, suitable for undergraduates and graduates alike, and only requires a minimal algorithmic background.” (Irina Ioana Mohorianu, zbMATH 1387.00020, 2018)
Buy options