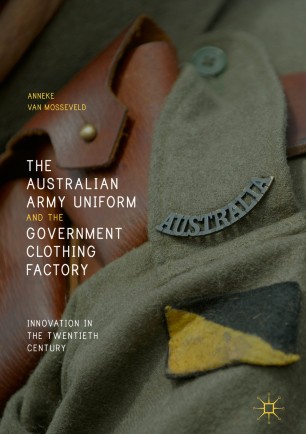 The Australian Army Uniform and the Government Clothing Factory

Innovation in the Twentieth Century

This book reveals the business history of the Australian Government Clothing Factory as it introduced innovative changes in the production and design of the Australian Army uniform during the twentieth century. While adopting a Schumpeterian interpretation of the concept of innovation, Anneke van Mosseveld traces the driving forces behind innovation and delivers a comprehensive explanation of the resulting changes in the combat uniform. Using an array of archival sources, this book displays details of extensive collaborations between the factory, the Army and scientists in the development of camouflage patterns and military textiles. It uncovers a system of intellectual property management to protect the designs of the uniform, and delivers new insights into the wider economic influences and industry linkages of the Government owned factory

Anneke van Mosseveld is Adjunct Research Fellow in the School of Humanities at the University of New England, Australia. She was previously engaged in industry development with the Australian, United States, German and Netherlands governments and has produced industry studies for government organisations, multinational companies and financial institutions. The research leading to this book received the prestigious 2017 C.E.W. Bean prize (postgraduate division).