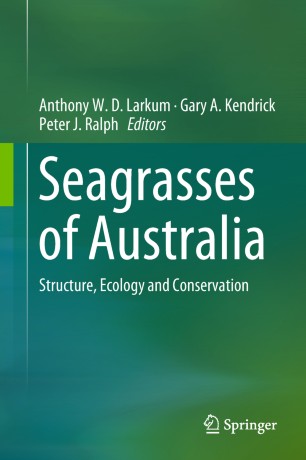 This book takes the place of “Biology of Seagrasses: A Treatise on the Biology of Seagrasses with Special Reference to the Australian Region”, co-edited by A.W.D. Larkum, A.J. MaCComb and S.A. Shepherd and published by Elsevier in 1989. The first book has been influential, but it is now 25 years since it was published and seagrass studies have progressed and developed considerably since then. The design of the current book follows in the steps of the first book.

There are chapters on taxonomy, floral biology, biogeography and regional studies. The regional studies emphasize the importance of Australia having over half of the world’s 62 species, including some ten species published for Australia since the previous book. There are a number of chapters on ecology and biogeography; fish biology and fisheries and dugong biology are prominent chapters. Physiological aspects again play an important part, including new knowledge on the role of hydrogen sulphide in sediments and on photosynthetic processes. Climate change, pollution and environmental degradation this time gain an even more important part of the book. Decline of seagrasses around Australia are also discussed in detail in several chapters. Since the first book was published two new areas have received special attention: blue carbon and genomic studies. Seagrasses are now known to be a very important player in the formation of blue carbon, i.e. carbon that has a long turnover time in soils and sediments. Alongside salt marshes and mangroves, seagrasses are now recognized as playing a very important role in the formation of blue carbon. And because Australia has such an abundance and variety of seagrasses, their role in blue carbon production and turnover is of great importance. The first whole genomes of seagrasses are now available and Australia has played an important role here. It appears that seagrasses have several different suites of genes as compared with other (land) plants and even in comparison with freshwater hydrophytes. This difference is leading to important molecular biological studies where the new knowledge will be important to the understanding and conservation of seagrass ecosystems in Australia. Thus by reason of its natural abundance of diverse seagrasses and a sophisticated seagrass research community in Australia it is possible to produce a book which will be attractive to marine biologists, coastal scientists and conservationists from many countries around the world.

Professor Tony Larkum’s early work was concerned with the processes of ion uptake in roots and giant algal cells. However, his interest in sub-aquatic physiology led increasingly to programs involving algae and seagrasses.
More recently, much of his research effort in this area has been devoted to photoinhibition and UV inhibition of algae and corals including algae in coral reefs and coral bleaching mechanisms and since 1997 his major work has been devoted to understanding the phenomenon of mass coral bleaching, which has been linked to increase in surface sea temperatures and thus to global warming.
In addition he has been interested in novel cyanobacteria, such as Acaryochloris, which have novel chlorophylls capable of absorbing near infra-red light.

Professor Peter Ralph is a Professor of Marine Biology at UTS, and Executive Director of the Climate Change Cluster (C3) in the Faculty of Science. He is also founder of the Deep Green Biotech Hub, member of the IOC-UNESCO Blue Carbon International Scientific Working Group and former leader of the CSIRO Marine and Coastal Carbon Biogeochemistry Cluster. Within C3, he leads two research programs: Algae Biosystems and Biotechnology, and Seagrass Health.

Professor Gary Kendrick is a marine plant ecologist who is passionate about understanding how we both can protect and use our rich marine environments. He has multiple interests including understanding biodiversity and ecology of temperate and tropical seagrass meadows and reefs, conservation and restoration of marine foundation species, and educating people about coastal and marine ecosystems.
His experimental work on the ecology of seagrass meadows, kelp and Sargassum beds includes understanding the role of seagrasses and kelps in structuring communities, herbivory in seagrass meadows and reefs, and the effect of ocean warming and human impacts on the resilience of seagrasses and macroalgae.​
Professor Kendrick has recently focussed on dispersal and recruitment ecology, and genetics of seagrasses, has measured and modelled the dispersal of seagrass seeds and documented seedling survival.