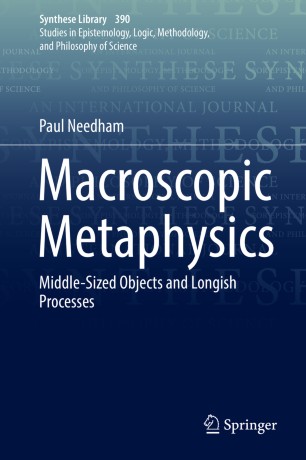 This book is about our ordinary concept of matter in the form of enduring continuants and the processes in which they are involved in the macroscopic realm. It emphasises what science rather than philosophical intuition tells us about the world, and chemistry rather than the physics that is more usually encountered in philosophical discussions. The central chapters dealing with the nature of matter pursue key steps in the historical development of scientific conceptions of chemical substance.

Like many contemporary discussions of material objects, it relies heavily on mereology. The classical principles are applied to the mereological structure of regions of space, intervals of time, processes and quantities of matter. Quantities of matter, which don’t gain or lose parts over time, are distinguished from individuals, which are typically constituted of different quantities of matter at different times. The proper treatment of the temporal aspect of the features of material objects is a central issue in this book, which is addressed by investigating the conditions governing the application of predicates relating time and other entities. Of particular interest here are relations between quantities of matter and times expressing substance kind, phase and mixture. Modal aspects of these features are taken up in the final chapter.

Paul Needham is professor of theoretical philosophy at the University of Stockholm. He has a first degree in chemistry and a masters in philosophy, both from the University of Birmingham, and a doctorate in philosophy from the University of Uppsala. His interests include metaphysics, epistemology and the philosophy of science. He has previously worked on time and tense, causation and subjunctive conditionals. More recent interests are concerned with issues related to chemistry. This includes themes connected to the work of Pierre Duhem, particularly in connection with his role in the establishment of the field of physical chemistry, studies of the origins of the concept of chemical substance in the ancients and its development in more recent times, the discussion of natural kinds and criteria of sameness of substance in modern chemistry, and applications of mereology in the interpretation of macroscopic notions.

“The book will be appreciated mainly by specialists working in the area of formal ontology. The historical sections are valuable for historians of science who seek to know how fundamental ancient views on key concepts like substance, process, element and compound, have developed to arrive at the semantic role they have today.” (Louis Caruana, Gregorianum, Vol. 100 (2), 2019)

“This is an excellent book, hugely well-informed about its subject matter and taking a strongly independent line on issues at the heart of much contemporary metaphysics. … this is an excellent book, enormously informative and absorbing … It certainly should be on the reading list of anyone interested in anything related to macroscopic metaphysics.” (Harold Noonan, Notre Dame Philosophical Reviews, ndpr.nd.edu, May, 2018)
Buy options