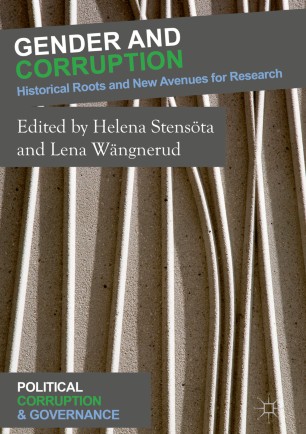 Part of the Political Corruption and Governance book series (PCG)

The link between gender and corruption has been studied since the late 1990s. Debates have been heated and scholars accused of bringing forward stereotypical beliefs about women as the “fair” sex. Policy proposals for bringing more women to office have been criticized for promoting unrealistic quick-fix solutions to deeply rooted problems. This edited volume advances the knowledge surrounding the link between gender and corruption by including studies where the historical roots of corruption are linked to gender and by contextualizing the exploration of relationships, for example by distinguishing between democracies versus authoritarian states and between the electoral arena versus the administrative branch of government—the bureaucracy. Taken together, the chapters display nuances and fine-grained understandings. The book highlights that gender equality processes, rather than the exclusionary categories of “women” and “men”, should be at the forefront of analysis, and that developments strengthening the position of women vis-à-vis men affect the quality of government.

Helena Stensöta is Associate Professor at the Quality of Government Institute, Department of Political Science, University of Gothenburg, Sweden.

Lena Wängnerud is Professor at the Quality of Government Institute, Department of Political Science, University of Gothenburg, Sweden.