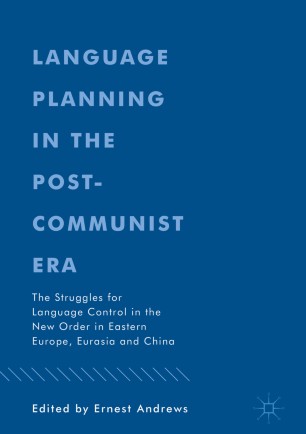 Language Planning in the Post-Communist Era

The Struggles for Language Control in the New Order in Eastern Europe, Eurasia and China

This volume provides an in-depth analysis of the attempts of language experts and governments to control language use and development in Eastern Europe, Eurasia and China through planned activities generally known as language planning or language policy. The ten case studies presented here examine language planning in China, Russia, Tatarstan, Central Asia, Ukraine, Lithuania, Latvia, Poland, Slovakia and the Czech Republic, and focus in particular on developments and disputes that have occurred since the ‘fall of communism’ and the emergence of a new order in the late 1980s. Its authors highlight the dominant issues with which language planning is invariably intertwined. These include power politics, tensions between ‘official language’ and ‘minority languages’, and the effects of a country’s particular political, social, cultural and psychological environment. Offering a detailed account of the socio-political and ideological developments that underlie language planning in these regions, this book will provide a valuable resource for students and scholars of linguistics, cultural studies, political science, sociology and history.

Ernest Andrews is Visiting Scholar at the Department of Linguistics, Indiana University Bloomington, USA. His previous publications include Linguistic Changes in Post-Communist Eastern Europe and Eurasia (2008), and Legacies of Totalitarian Language in the Discourse Culture of the Post-Totalitarian Era: The Case of Eastern Europe, Russia and China (2011).

“The book presents a series of country studies that give a historical account of ‘the evolution of the country’s ‘national’ language’, and, of language planning activities since the ‘start of the Perestroika reforms in the Soviet Bloc in the late 1980s’ … . this volume offer plenty of reference points, while the post-communist country descriptions emphasizing legislative events and institutions equally offer fine entry points for readers to pursue in-depth study of their own.” (Björn Jernudd, Language Policy, Vol. 18, 2019)
Buy options