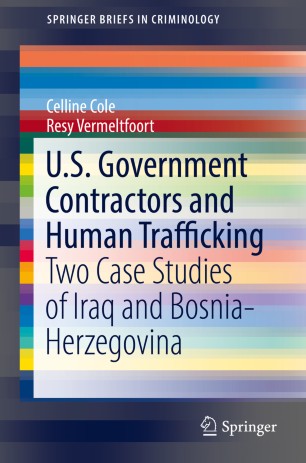 This Brief examines the role of United States private military contractors (PMCs) in human trafficking and forced labor in case studies of Iraq and Bosnia-Herzegovina. Through the lens of these cases, the authors explore the legal and regulatory deficiencies surrounding PMCs in conflict zones, and the role of international criminal law in this context. It uses an integrative model of  state corporate crime as a theoretical and analytical framework.

Celline Cole studied psychology, criminology, and international criminal justice in Heidelberg and Amsterdam. She is a 2016 cum laude graduate of the M.Sc. program International Crimes and Criminology at Vrije Universiteit (VU) Amsterdam where she also worked as a researcher at the Center for International Criminal Justice (CICJ). Her main research and personal interests are human trafficking, mental health and human rights, and psychosocial interventions in conflict zones. Celline recently completed a four-month internship in the Mental Health Policy and Service Development team at the World Health Organization (WHO) in Geneva and is currently pursuing a further graduate degree in clinical psychology at Freie Universität Berlin.
Resy Vermeltfoort holds a Bachelor’s degree in Journalism and Political Science and graduated from the M.Sc. program International Crimes and Criminology at the Vrije Universiteit (VU) Amsterdam. She worked as a Human Rights and Advocacy Officer at Refugee Law Project, a community outreach project of the School of Law, Makerere University, Uganda. During her time with Refugee Law Project her thematic areas of focus were transitional justice and gender-based violence against men and boys during conflict. Resy currently works on the topics of gender equality and women’s economic empowerment at SNV Netherlands Development Organisation, Vietnam.