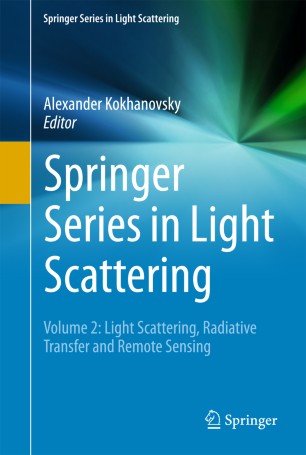 This book presents a survey of modern theoretical and experimental techniques in studies of light scattering phenomena and radiative transfer processes in random media. It presents reviews on light scattering by sea water and bubbles, and includes a separate chapter addressing studies of the remote sensing of crystalline clouds with a focus on the shape of particles—a parameter rarely studied by passive remote sensing techniques. In particular, it offers a comprehensive analysis of polarized radiative transfer in optically active (e.g., chiral) light scattering media and explores advances in spectro-polarimetry of particulate media. Lastly it discusses new developments in light scattering for combustion monitoring.

Alexander Kokhanovsky graduated in 1983 in Theoretical Physics (The Department of Physics, Belarusian State University, Minsk, Belarus): the main topics of his thesis was the solution of the vector radiative transfer equation for the case of chiral light scattering media. Particular attention was given to the study of the properties of radiation in deep layers of a turbid medium under study. The phase and extinction matrices have been calculated using the Maxwell theory for chiral spheres.

In 1983, Dr. Kokhanovsky joined the Laboratory of Light Scattering Media of the Institute of Physics of National Academy of Sciences of Belarus as a Junior Research Scientist. In 1986, he started a Ph.D. course in Optics at the Institute of Physics (National Academy of Sciences of Belarus, Minsk, Belarus). During the Ph.D., his focus rapidly moved to studies of Atmospheric Optics, in particular to the investigation of atmospheric aerosol and clouds using optical methods. As a Ph.D. student he was responsible for several projects related to studies of light propagation and image transfer through atmosphere and ocean. The optical properties of whitecaps have been studied as well.

In December 1991, he was awarded the Ph.D. degree in Optics for the thesis “Optical Properties of Atmospheric Aerosols and Foams”. Simple analytical equations have been proposed for radiative characteristics of coarse-mode aerosols, water clouds, and foams in terms of the parameters of microstructure such as size distribution, shape, internal structure, and chemical composition of scatterers.

After the Ph.D. defense Dr. Kokhanovsky has focused his research on the development of fast algorithms to retrieve cloud properties using satellite observations. He also studied several inverse problems of light scattering media optics including the diffuse-wave spectroscopy and laser diffraction spectrometry. In 1994, Dr. Kokhanovsky was awarded the Science and Technology Agency of Japan Fellowship to work at the National Space Development Agency (NASDA) of Japan on cloud remote sensing. He spent one year (1996) in Tokyo (Earth Observation Research Center) working in the group of Prof. Teruyuki Nakajima in the area of cloud and snow remote sensing using spaceborne observations (GLI/ADEOS). Afterwards he was awarded the Alexander von Humboldt Fellowship (Clausthal University, Clausthal-Zellerfeld, Germany, 1998) and Engineering and Physical Sciences Research Council Fellowship (Imperial College London, UK, 1999), where he developed novel techniques to derive properties (e.g., particle size distribution) of light scattering particles using small-angle and polarimetric optical measurements. Also, the tensor radiative transfer equation was derived. This equation has been proved to be useful in studies of light propagation in anisotropic media.

In March 2001, he joined the Institute of Environmental Physics (Bremen University, Bremen, Germany), where he was responsible for the development of cloud, snow, and aerosol retrieval algorithms for MERIS, AATSR, and SCIAMACHY on board ENVISAT. A number of papers related to the generation and analysis of L2 aerosol, snow, and cloud products were published. Dr. Kokhanovsky participated and took a lead in several ESA, DFG, BMBF, and ESF projects. Also, he has published three books during this period of time.

From October 2013, Dr. Kokhanovsky has been carrying on his research work at VITROCISET and EUMETSAT (Darmstadt, Germany). The main subject of his research is the development of L2 aerosol and cloud retrieval algorithms for the Multi-viewing Multi-channel and Multi-polarization Imager (3MI) on board future Eumetsat Polar System – Second Generation (EPS-SG).