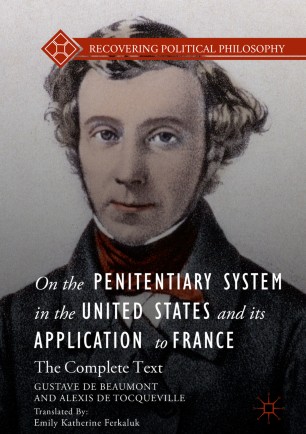 This book provides  the first complete, literal English translation of Alexis de Tocqueville’s and Gustave de Beaumont’s first edition of On the Penitentiary System in the United States and Its Application to France.  The work contains a critical comparison of two competing American penitentiary disciplines known as the Auburn and Philadelphia systems, an evaluation of whether American penitentiaries can successfully work in France, a detailed description of Houses of Refuge as the first juvenile detention centers, and an argument against penal colonization. The work provides valuable insights into understanding Tocqueville as a statesman, as well as a comparative look at civic engagement in early American and French penal reform movements. The Translator’s Introduction provides historical context for understanding Tocqueville’s work in French penal reform and the major themes of the report.  The book thus fills a void in Tocquevillian studies and extrapolates the roots of American and French criminal justice systems in the nineteenth century.