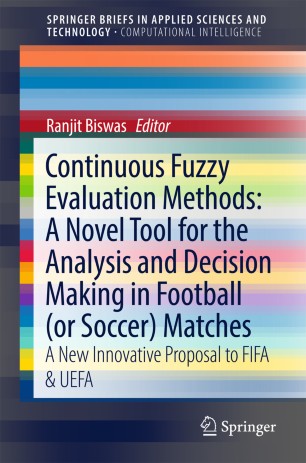 Continuous Fuzzy Evaluation Methods: A Novel Tool for the Analysis and Decision Making in Football (or Soccer) Matches

This book presents a proposal for a new soft computing innovative method called by “CFE” forevaluation of the football matches of FIFA(IFAB) and UEFA to compute the true ‘Winner’.  It is a research work in the area of ‘Football Science’, being proposed to FIFA (IFAB) and UEFA, Zurich, Switzerland for consideration to replace the existing obsolete and weak rules of football matches of 90 minutes to declare the final ‘Winner’.  In CFE, the final decision about any football match of 90 minutes is obtained “by computation”, by execution of a software called by ‘CFE-software’ with the real time input values directly from the field on a number of highly significant parameters, some of them being continuous variables. The result of m-n goals at the end of 90 minutes play in a football match is just one of the many parameters for the computation of the ‘Winner’ in our proposed CFE method. The evaluation is mainly based upon the application of Fuzzy Logic, ‘Fuzzy Pocket Machine’, fast Computer Server, good Communication system from playing-field to the server (as used in Cricket matches)  and the CFE-software at the server. The Referees need not be experts in fuzzy set theory; they can be easily trained within just 30 minutes of demonstration on : how to use the ‘fuzzy pocket machine’ for giving real time inputs to the database at the server.