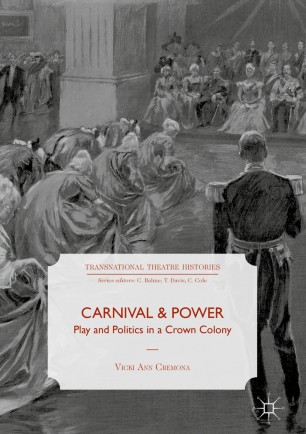 Play and Politics in a Crown Colony

This book shows how Carnival under British colonial rule became a locus of resistance as well as an exercise and affirmation of power. Carnival is both a space of theatricality and a site of politics, where the playful, participatory aspects are appropriated by countervailing forces seeking to influence, control, channel or redirect power. Focusing specifically on the Maltese islands, a tiny European archipelago situated at the heart of the Mediterranean, this work links the contrast between play and power to other Carnival realities across the world. It examines the question of power and identity in relation to different social classes and environments of Carnival play, from streets to ballrooms. It looks at satire and censorship, unbridled gaiety and controlled celebration. It describes the ways Carnival was appropriated as a power channel both by the British and their Maltese subjects, and ultimately how it was manipulated in the struggle for Malta’s independence.

Vicki Ann Cremona is Chair of the School of Performing Arts at the University of Malta and lectures in the Theatre Studies Department. She was appointed as Ambassador of Malta to France between 2005-2009, and to Tunisia between 2009-2013. She has published internationally, mainly about Carnival and public performance, Maltese theatre, and Commedia dell’Arte.

“Vicki Ann Cremona’s study examines a familiar topic, the subversive performative possibilities of Carnival, from an unfamiliar and fascinating perspective, the operations of Carnival and street performance in Malta since the nineteenth century.  Such key contemporary concerns as national identity, class struggles, and modern power politics as they are explored in public performance are presented in illuminating new perspectives against as background which is both inside and outside the conventional European sphere.” (Marvin Carlson, Sidney E. Cohn Distinguished Professor of Theatre, Comparative Literature and Middle Eastern Studies, City University of New York, USA)

“As a citizen of Malta, Vicki Ann Cremona has an insider’s perspective on the social and political conditions of the annual performances of Carnival.  She has written a major study on the social conditions and satiric aims of Carnival performances. She offers an insightful and astute analysis of the political implications of street performances, costumes, and the public and private balls. Her historical perspective focuses on the negotiation of power through play, particularly in the years before Independence when Malta was a British colony, and traces the link with modern times.” (Thomas Postlewait, University of Washington, Seattle, USA)

“Play is emerging as an important trope of contemporary society but there have been few rigorously argued investigations of how contemporary forms have emerged. Vicki Ann Cremona’s historical examination of Carnival in Malta fills an important gap in this field. She traces current celebrations back to colonial contexts, in which theatricality, spectacle and performance during Carnival played important roles in the negotiation of power. This book is a persuasively argued story of resistance, celebration and fun, exploring how a taken for granted tradition has worked as a changing cultural form and documenting the implications of  bringing together history and current Carnival practice.” (Christopher Perkins, University of Manchester, UK)

“Professor Vicki Ann Cremona's ground-breaking book is indispensable towards understanding the correlation between power politics and Carnival, a key element of Malta's social entertainment calendar, and its development into a means of not always submerged confrontation between the colonized and the colonizer, as well as a useful partisan political tool.” (Joseph Pirotta, University of Malta, Malta)