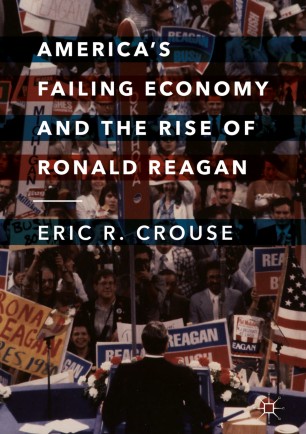 America's Failing Economy and the Rise of Ronald Reagan

This book examines one of the most important economic outcomes in American history—the breakdown of the Keynesian Revolution. Drawing on economic literature, the memoirs of economists and politicians, and the popular press, Eric Crouse examines how economic decline in the 1970s precipitated a political revolution. Keynesian thought flourished through the presidencies of Lyndon B. Johnson, Richard Nixon, and Gerald Ford, until stagflation devastated American workers and Jimmy Carter’s economic policies faltered, setting the stage for the 1980 presidential campaign. Tracking years of shifting public opinion and colorful debate between free-market and Keynesian economists, this book illuminates a neglected era of American economic history and shows how Ronald Reagan harnessed a vision of small government and personal freedom that transformed the American political landscape.

“This is a long overdue acknowledgment of a watershed event in politics and economics that hasn’t been fully covered until now. Eric Crouse is a masterful narrator and analyst of significant developments in twentieth century and current political-economic thought. An engaging big-picture look at a pivotal, overlooked time in American history.” (Paul G. Kengor, Professor of Political Science, Grove City College, USA)“The economic stakes America faced during the era of the Jimmy Carter presidency have remained oddly forgotten and underplayed, as if a dream, a mild nightmare perhaps, which the nation left behind as the opportune business of life in the 1980s and beyond demanded all attention. Eric Crouse at last sets down and narrates this all-too-real history, discovers it in its tenseness and fullness from the wide array of sources of a nation transfixed with its inability to solve the maddening problem of stagflation. Here is a portrait of a nation realizing that it was arriving at a turning point, facing the perplexing question of what new direction to set off in, and trying to summon the will to execute its own decision.” (Brian Domitrovic, Associate Professor of History, Sam Houston State University, USA)
Buy options