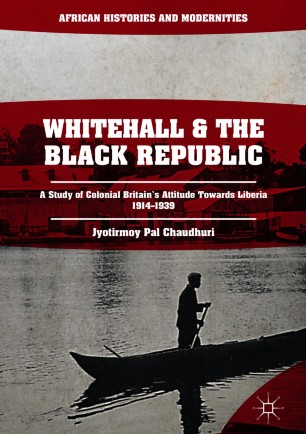 Whitehall and the Black Republic

A Study of Colonial Britain's Attitude Towards Liberia, 1914–1939

This book examines the history of the relationship between Liberia and Britain—the world’s first black republic, founded by former slaves, and the world’s strongest colonial power. Jyotirmoy Pal Chaudhuri excavates a wealth of archival sources to reconstruct a turbulent narrative spanning key points in twentieth-century Liberian history. Pal Chaudhuri argues that the Black Republic was never a serious item on the British agenda for constructive action in West Africa, as seen in the repeated failure of their concessionaires, their interference with the Firestone rubber project, and their efforts to have Liberia expelled from the League of Nations. Untangling the conflicts and contradictions between Britain’s colonial interests and humanitarian ideals, Whitehall and the Black Republic is a long overdue contribution to the history of Liberia and the British Empire.

Jyotirmoy Pal Chaudhuri is the author of numerous articles on African history and Liberian history. He is a former professor and history department chair at the University of Liberia and Cuttington University, Liberia, as well as the John Cadbury Fellow at the Centre of West African Studies, University of Birmingham, England.

“Few scholars have published such meticulous research on Liberian history in book form. Jyotirmoy Pal Chaudhuri has crafted a serious account of a turbulent period when internal demands for incorporation were enmeshed in the politics and diplomacy of colonial imperialism, bringing to the fore a critical mass of modern-educated indigenous Liberians who were conscious of their marginalization and prepared to assert their rights within the ambit of the fledgling Liberian state. A singular contribution to the history of Liberia.” (Elwood Dunn, Alfred Walter Negley Professor Emeritus of Political Science, The University of the South, USA)
Buy options