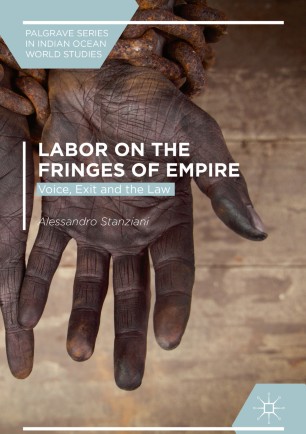 Labor on the Fringes of Empire

Voice, Exit and the Law

After the abolition of slavery in the Indian Ocean and Africa, the world of labor remained unequal, exploitative, and violent, straddling a fine line between freedom and unfreedom. This book explains why. Unseating the Atlantic paradigm of bondage and drawing from a rich array of colonial, estate, plantation and judicial archives, Alessandro Stanziani investigates the evolution of labor relationships on the Indian subcontinent, the Indian Ocean and Africa, with case studies on Assam, the Mascarene Islands and the French Congo. He finds surprising relationships between African and Indian abolition movements and European labor practices, inviting readers to think in terms of trans-oceanic connections rather than simple oppositions. Above all, he considers how the meaning and practices of freedom in the colonial world differed profoundly from those in the mainland. Arguing for a multi-centered view of imperial dynamics, Labor on the Fringes of Empire is a pioneering global history of nineteenth-century labor.

Alessandro Stanziani is Professor of Global History at the School for Advanced Studies in the Social Sciences (EHESS) at PSL Research University, France. He has authored seven books and more than 130 peer reviewed articles and edited eight books.

“For more than a century, Western scholars and ideologues have told a beautiful tale about how the transition to capitalism has engendered the spread of human freedom. The abolition of slavery in the course of the nineteenth century morphed into exhibit A of this attractive account. Yet in his field-redirecting study, Alessandro Stanziani shows in great detail why this fairy tale should be relegated to the realm of myth. Coercion in a wide variety of forms, Stanziani shows,  continued to define labor relations after emancipation—from India to Reunion, from the United Kingdom to France. The forms that this coercion took differed between empires and between colony and metropole, but reading this book and seeing the high degree of violence in labor relations makes it hard to remain attached to the stories that liberal societies have told about themselves.” (Sven Beckert, Laird Bell Professor of American History, Harvard University, USA)“This book is bursting with new ideas and data. An important complement to the author’s Sailors, Slaves, and Immigrants (Palgrave Macmillan, 2014), Alessandro Stanziani challenges prevailing assumptions about free and unfree labour and British and French colonial practices. A particular innovation is the analysis of legislation and its philosophical foundations in relation to the actual situation on the colonial ground, rather than in isolation or in relation to institutional economics. Original and provocative, from a scholar of considerable significance.” (Nigel Worden, Emeritus Professor of History, University of Cape Town, South Africa)
Buy options